In the olden times of the long long ago, Don A. Wollheim turned his new company, DAW Books, to importing, translating and publishing foreign SF. This interesting experiment was not rewarded with glowing sales and eventually the experiment was dropped.

I did have this edition, though: 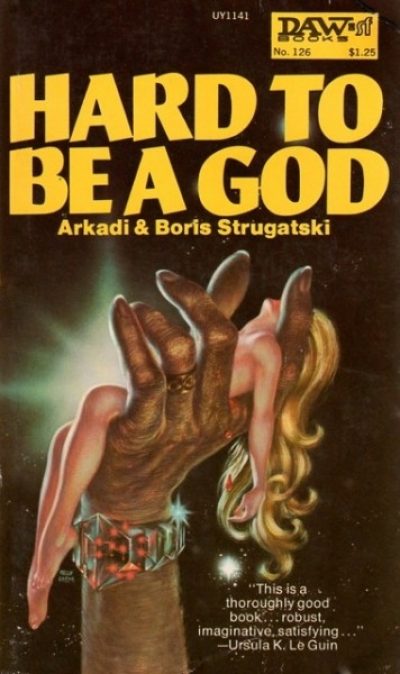 Whose cover depicts a scene found nowhere in the book. It was translated by Wendayne Ackerman, working from a German translation, I believe). No doubt Ackerman did the best she could but the the new Chicago Review Press edition is superior in pretty much every way.

Arkanar is a backward little kingdom on a world much like Earth, a feudal despotism of a familiar kind. Don Rumata claims to be an aristocrat from Estor, a region in a distant empire far grander than Arkanar. In fact he is from Earth, now a socialist paradise or as close as anything involving humans can be to paradise, and he has stolen the identity of a dead aristocrat. His job is to mingle with the upper classes of this kingdom, recording everything around him for his superiors back on Earth. Interference is absolutely banned; worlds must be allowed to develop at their own pace.

Earth’s Basis Theory maps out how societies behave and will develop or at least it is supposed to. To Don Rumata’s alarm, Basis Theory seems to have broken down where Arkanar is concerned. Thanks to the efforts of one Don Reba, the kingdom now has a secret police, the Grey Guard, as bad as the NKVD or SAVAK, and the reign of terror aimed at intellectuals that followed its formation has convinced Don Rumata that Reba must be a singular individual outside the norms of Basis Theory, someone whose existence clearly calls for extreme measures.

Unfortunately for Rumata and those he cares about in Arkanar, the Earth of the Noon Universe really does take that non-interference policy seriously. That limits what he can do and how effective his efforts can be; what may be worse from Rumata’s point of view is that because the monstrous behavior of Arkanar’s people rises out of the social-economic level of the kingdom, the most he can hope to accomplish is to slap a few bandaids on suppurating wounds. But since Rumata cannot do nothing and bandaids are all he has, that’s what he will go with.

Even taking into account that this is Russian, this is not the most upbeat SF novel I’ve read. Rumata might – might – be able to save a few individuals but attempts to prematurely reform the kingdom are doomed to go nowhere. New rulers may start out with the best of intentions but will be forced to become very much like the people they replaced.

I didn’t remember the plot of this at all (or for that matter, any of the other books by these authors I have read, not that that is many) and I certainly didn’t expect to be reminded of Lloyd Biggle’s Cultural Survey novels. Where the IPR allows its agents one cheat, Earth in this book actually follows its own rules, no doubt aided in this matter by the fact intervention cannot accomplish anything of use.

While the introduction by Hari Kunszruis is sadly not up to the mark of the one Le Guin provided for the new translation of Roadside Picnic 1, the essay by Boris Strugatsky is fascinating. There’s probably never been a really great time to be an SF author in Russia but the Brothers Strugatsky managed to run afoul of a backlash against fantastic literature and other art forms shown not to be compatible with socialism by the fact Comrade Khrushchev did not care for them. It probably didn’t help them much that there are clear digs at certain previous Soviet regimes in this; Reba started off as an anagram for Beria, the notorious head of Stalin’s secret police.

The Chicago Review Edition can be found here.