I had an interesting experience as a result of last week’s review of Yokohama Kaidashi Kikō, volume eight. Someone attending an event I was co-hosting showed up on a scooter much like the one Alpha rides, specifically because I reviewed YKK. That’s awesome! And now I am a little worried about how people will commemorate the MilSF and Cosmic Horror books I review.

Alpha strolls along the coast, heading towards home and enjoying some industrial-era archaeological sites along the way.

Comments:I am torn between how admiring the pretty landscape and ruins and worrying about Alpha. Who, as we know, has a history of falling off seaside cliffs.

Alpha finally arrives home, only to be confronted by a transformed Takahiro: he is taller, almost adult. and now a part-time operator of his grandfather’s store.

There was quite a bit of awkward blushing during this conversation. Just as well for Takahiro that Matsuki was not around.

I was actually a bit worried about Ojisan. Why wasn’t he parked in his chair outside the store/gas station? Then I realized that he was still being mentioned in the present tense.

Alpha’s return home is drawn out and highly enjoyable.

I wonder who dealt with the ruins of the shop? I do not think we’ve see Alpha do heavy labour. At the time the ruins were cleared, Takahiro was still too young…

Alpha begins the job of rebuilding by re-erecting one of her fish-shaped weathervanes.

Ashinano manages to get a full (nearly wordless) story out of that simple task.

Ojisan and Alpha compare notes on how their year apart went.

Alpha set out to make money to repair the shop, but spent more than she earned. For his part, Ojisan presents her with a reminder that he is old and mortal. But for some reason the reminder is not grim.

Chance-met on the road, Sensei invites Kokone to wait for Alpha at her clinic. Though aware that Sensei was involved in the creation of the Alpha type robots. Kokone is astonished by the revelation that follows. 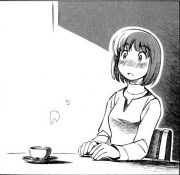 Sensei follows up her astounding revelation about her personal connection to the Alphas with another: not only does she have copies of the enigmatic record Kokone found earlier, she has a functioning record player on which to play it.

Sensei gives Kokone a veiled warning about what her research may turn up: times past were hard and not all robot history is pleasant.…

Alpha takes Kokone on a tour of the local places that are special to Alpha.

They don’t call it a date but it was totally a date.

Heavy, windless rain storms roll in; Alpha enjoys the weather from the shelter of her new awning.

Finally! A reason other than terrible location for there to be no customers. Well, in addition to ​“technically, she does not have a tea shop so much as an outdoor counter adjacent to a building.”

Alpha adds netting to give her tea shop four walls, of a sort. Despite her expectations, customers do arrive.…

People of the Bay

Sitting near the Misago’s pond, Ayase is startled by a feminine form diving over him into the water. It’s not whom he expects.…

Yet again there is a reminder of how ephemeral humans are and how ephemeral robots and the Misago are not. There also seems to be a consensus that whatever the Misago is, she is not a robot. She predates robots.

Ayase and Matsuki bond over her extraordinary skill flying kamas

Kamas are a sort of flying fish-lizard thing. More evidence of genetic engineering?

This was very a touching and sentimental return and yet… Thanks to the continual reminders that Takahiro is playing Little Jackie Paper to Alpha’s Puff the Magic Dragon, and Ojisan’s comments, I expect an issue where relationships end irrevocably, rather than evolving: someone moves away (which the kids may do, since there is no detectable economy locally) or someone dies. And it’s a coin toss whether that would be Ojisan or Sensei.…

Sadly, there is no legal English language edition to which I can steer, so instead have a little mystery: why is it people consistently buy more books from Amazon due to my reviews on days when I review books you cannot buy from Amazon?