Eleanor Estes’ 1960 The Witch Family is a standalone children’s fantasy.

Poor Old Witch! Banished by two interfering seven-year-old girls to the peak of a bleak glass mountain, there to languish for the rest of her days. Why? Because Old Witch is exceptionally wicked,.

There is a ray of hope. Amy and Clarissa left a loophole.

If Old Witch can deny her essential nature, if she is good, then she can return for one night: Halloween. But what a thing to ask of a witch who has outlived one hundred human generations!

Old Witch is not alone on her isolated mountain: her cat Old Tom was banished with her and Malachi the bumblebee chose to come along. He provides her with much needed moral guidance. Luckily, he can make himself understood, as he is a spelling bee.

Although Old Witch is far away, Amy and Clarissa can still watch and communicate with her through their drawings. The two girls are as firm as seven-year-olds can be, but not utterly heartless. Old Witch is permitted to summon Little Witch, a witch girl the same age as Amy and Clarissa. In short order, a baby witch completes the set. Old Witch may be an exile but at least she has the rudiments of a family.

The girls were content to exile and surveil Old Witch; they aren’t at all interested in interacting with her. Little Witch, however, is their age and a potential friend. Soon the two girls reach out to the little witch. Soon, they are drawn into the witches’ world. Well, that can only end well. 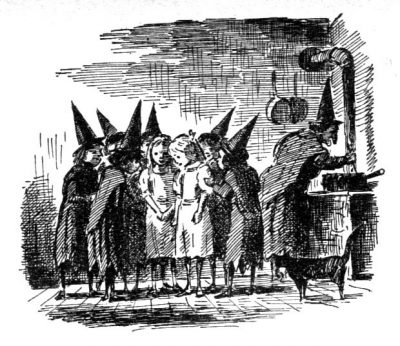 The book features black and white drawings by Edward Ardizzone. 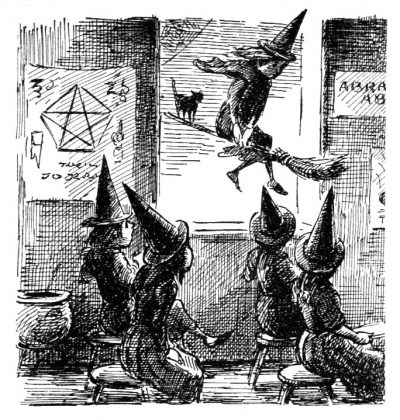 Surely when witches fly on brooms, the bristles are behind them, not in front? But Ardizzone is very consistent in showing his witches flying with the bristles in front. Perhaps this is because The Witch Family witches generally prefer to do things backwards.


I never encountered this amiable children’s story in my youth, but I do remember other books by Estes. I read several of her Moffat books , two of which won the Newbery. As I recall, those books were nowhere near as grim as one might expect from Newbery winners: bo dead pets, no martyred spiders, and no childhood friends abruptly struck down by lightning.

This book has a bit of grim. For most of the book, Old Witch does not seem all that bad. Her grumpiness could be excused because her circumstances and advanced years. But there is one section involving rabbits, in which the plot heads in a rather Watership Down direction. The rabbits may be as intelligent as any of the other characters in the book, but to Old Witch they are simply easy prey, a source of food and delightful treasures. Old Witch slips back into her bad old ways; the resulting siege is told from the terrified rabbits’ point of view.

Like any decent heartwarming children’s book, the metaphysical underpinnings of The Witch Family should give adults nightmares if they were to seriously consider the implications. Amy and Clarissa upend the Old Witch’s world on a whim, manifesting impressive magical (but non-witchy) powers in the process. It is not clear whether Old Witch is a fantasy the girls make real or an ancient personage of great power who falls under their thrall. Either way, the main difference between Amy and Clarissa and that kid from It’s a Good Life is that the author is too good-natured to have her girls think the wicked old witch into a cornfield. Instead, we get a heart-warming story about how the Old Witch, Little Witch and the baby Witch became a family 1.

The Witch Family is available here.

1: Best not to wonder what happened to the families to which Little Witch and the witch baby belonged before Amy and Clarissa began interfering.