John Brunner’s 1983 The Crucible of Time is a fine example of science fiction inspired by the science of the time. As Brunner explains in his foreword

It is becoming more and more widely accepted that Ice Ages coincide with the passage of the Solar System through the spiral arms of our galaxy. It therefore occurred to me to wonder what would become of a species that had evolved intelligence just before their planet’s transit of a gas cloud far denser than the one in Orion which the Earth has recently — in cosmic terms — traversed.

I will leave it to my commentariat to discuss to what degree the above represents current scientific consensus. The basic idea, that an inhabited world has the misfortune to traverse a region like this, 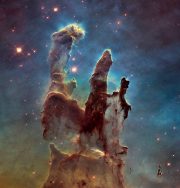 is certainly enough of a hook from which to hang an SF novel.

In this case, a highly episodic novel. Really, more a collection of linked novellas.

Part One: The Fire is Lit

Jing has traveled halfway around his world in search of knowledge, enduring great personal privation and the loss of every other person in his expedition. Now, it seems that he has found a community of like-minded individuals, one armed with a remarkable new technology: lenses! But even as he revels in his discoveries, a new, high CFR plague is sweeping across the world.

Although it took ages for advanced civilization to recover from the effects of the great plague, the people of this bright new age can rightly compare their accomplishments to those of the legendary Jing himself! It’s a pity that the climate is so rapidly cooling, driving desperation-crazed refugees straight towards the heart of the new civilization.

Although it took ages for advanced civilization to recover from the effects of the terrible ice age, recover it has. As the world slowly warms, explorers reconnect communities long isolated. It’s just too bad that the warming should itself cause calamities unlike any seen in recent history.

Although it took ages for advanced civilization to recover from the effects of the great floods and inexorable rise in sea levels that followed the great warming, recover it has. Slowly declining fertility, the legacy of Flood-era miscegenation, is a concern, but science offers a cure! Which, as it turns out, will have effects far worse than the malady it cures.

Although it took ages for advanced civilization to recover from the effects of the great population boom and the famines which naturally followed, recover it has. This era’s greatest minds are confronted with a peculiar mystery: what mysterious emanation from an unknown substance could cause a very strange form of necrosis in living tissue? And how will the survivors deal with the aftermath of the catastrophe?

Although it took ages for advanced civilization to recover from the effects of the great meteor impact, recover it has. Unfortunately, even though scientists have begun to understand just what dangers face their solar system, they have no idea how to escape them.Out in space, a huge asteroid is tumbling towards an unprotected world.

The last chapter provided a memorable lesson in just how devastating large impacts can be — happily, a demonstration provided on another, less lucky world. If civilization is to be saved from yet another catastrophe, scientists must master the technologies of space flight. However, certain academics stand in their way.

You really don’t see a lot of books featuring the dangers of miscegenation these days. That’s the term Brunner uses, by the way. In his defence, the aliens are, well, alien, and various species or subspecies are at least as different from each other as are terrestrial horses and donkeys.

I rather enjoy science fiction stories that involve the interstellar medium, the diffuse matter between the stars1.I don’t often encounter them, so this was a pleasant treat. Brunner manages to make ​“interactions with the interstellar medium” even more exciting than one would expect. He chose as his setting another world, a world whose system is passing though a stellar nursery. That relatively crowded galactic neighbourhood is a great location for stories about repeated disasters, catastrophes that range from encounters with stellar debris to uncomfortably close proximity to supernovas.

And … rather than telling a story about hapless human colonists whose ancestors had terrible taste in habitable worlds, Brunner used an alien race as protagonists. There are no humans in this book at all.

Furthermore, these are not implausibly humanoid aliens. We are never given a clear description, but hints dropped here and there leave the impression of a creature something like a cross between a jellyfish, a crab without a shell, and an octopus. While they are vulnerable in some ways (they do not handle starvation well), in other ways they are a robust, flexible species.

They are also unlike humans in that they focus on biotechnology rather than machinery. This is something I had forgotten, but an inkling of that detail may have been in my mind when I compared Children of Time o this book.

We never get to know any of the aliens well; none of the characters survive to the next novella. A lot of time passes between calamities, and the aliens don’t live anywhere near long enough to bridge the interval between stories.

I wasn’t really keen on this when I read it back in 1983. I appreciated it more this time around 2. For some reason, in 1983 the disasters made a much larger impression on me than the incremental progress the aliens manage to make, despite all the grief that their planet, and their stellar neighbourhood, throw at them. I like a glimmer of light at the end of the tunnel.

I also appreciated the fact that this book completely rejected the human perspective. Many SF novels feature alien protagonists, but there are usually humans in the picture, whether as hapless visitors or ominous space invaders. There are no humans here, nor any implausibly humanoid aliens.

Crucible of Time is available in a variety of editions3.

1: Granted, we may be plowing into the Local Fluff [1] even now. But I don’t know that we knew that in 1983, In any case, the effects will be more along the lines of “ the heliopause is pushed down to Venus’ orbit” and not ​“a delightful Quality Street box of assorted doomsdays.”

2: Aside from having grown impatient with books whose plots are informed by the conviction that ​“Space! Is the Only Answer!”

3: Sadly, the edition I stumbled across while looking for a replacement copy of Crucible (a 1995 omnibus of Children of Thunder , The Tides of Time , and The Crucible of Time ) seems to be very much out of print. I suppose that makes sense, as it’s over a fifth of a century old.