By the opening years of the 24 th century, humans had terraformed Mars. Owing to a slight miscalculation re the amount of ice present, 90% of Mars is ocean-covered. The colonists have renamed Mars ​“Aqua” and embraced the possibilities of a largely ocean-covered world.

15-year-old Akari Mizunashi emigrates to Mars Aqua in hopes of succeeding as an Undine, a female gondolier, in the city of Neo-Venizia. Aria, a small but respectable company, has taken her on as an apprentice. It will be a period of learning and testing; success is not guaranteed.

Nor, it seems, is it easy to find her way to her employers’ place of business through a maze of canals. First test? 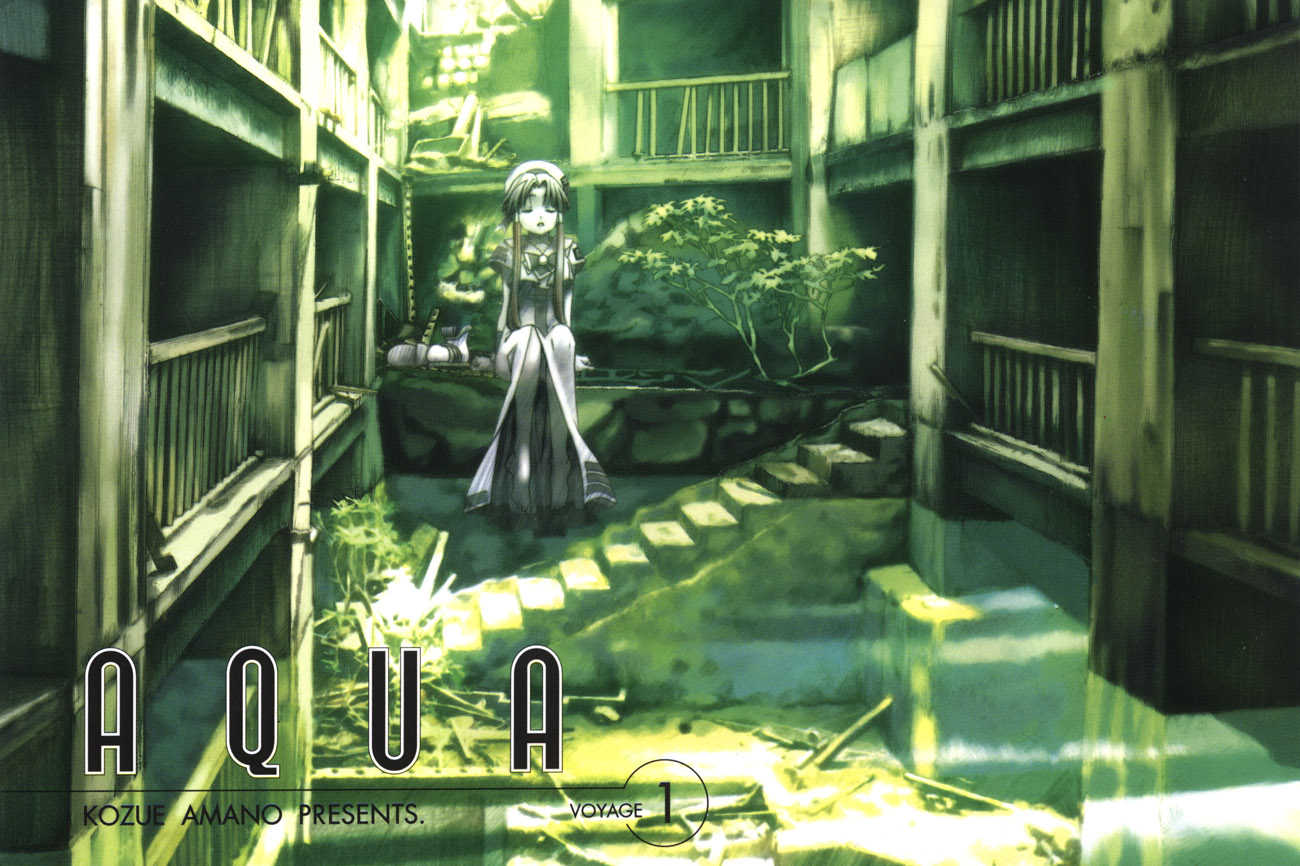 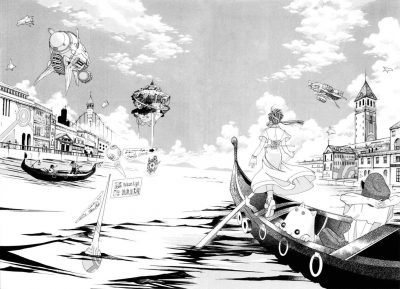 Undine companies are traditionally headed by Martian cats. The cats are said to be as intelligent as humans. I am not even convinced they are cats. 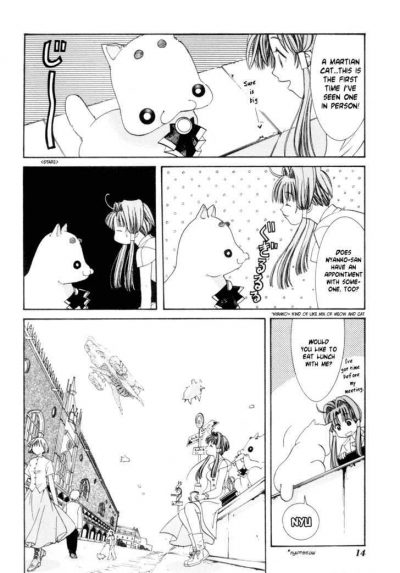 This 24 th century’s job market seems to be as gender-segregated as today’s. Undines are a special (and apparently small) class of female gondoliers. I would just bet that they have to meet expectations way beyond those demanded of the men.

Akari is strangely poorly informed about her new world and her new job — even though we are told that becoming an Undine has been her lifelong dream. This setup allows the author to infodump with abandon, but it makes our heroine seem a bit of a ninny. I think I was supposed to find Akari more lovable than I do.

The Guide on the Water

Akari’s first day as a trainee Undine allows her to publicly demonstrate the difference between training simulations and the real world. Lucky her! But at least she makes a new friend: Aika, who is a trainee for rival firm Himeya.

Akari works at the same company as an Undine named Alicia. Aika has a massive, massive crush on Alicia. A crush of the ​“blushing, inarticulate stalking” variety. 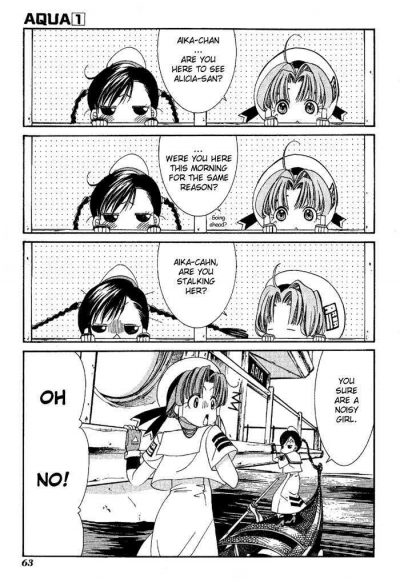 Aika is quick to see the benefits of tolerating Akari. 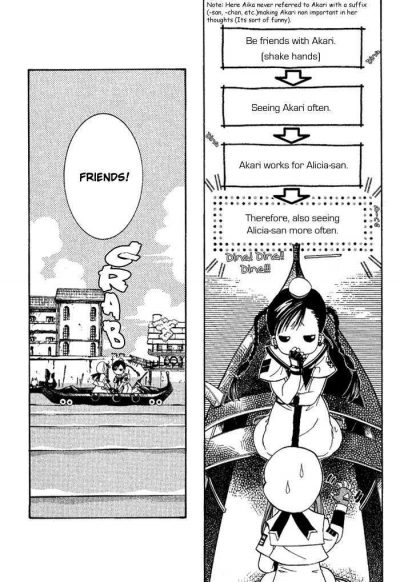 Befriending people you don’t much care for to get closer to people with whom you are smitten is a time-honoured technique and will no doubt produce the usual delightful results.

Akari wakes to find the city partially inundated by an exceptionally high tide. The city comes to a stand-still … but people choose to treat this as a holiday, not a calamity.

Why … why didn’t they just construct all the structures in the city slightly higher, rather than putting up with having the lowest level flood to a depth of six inches every once in a while? 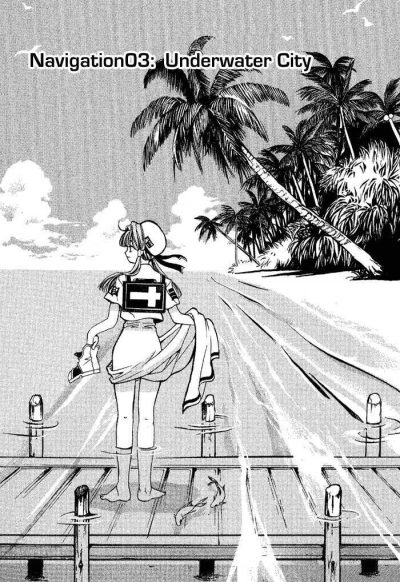 The Kingdom of Cats

What secret business compels the Chairman to wander off on his own? And will Akari and Aika survive trying to find out?

They are not eaten by eels at this time. There is a certain amount of scenery-porn.

The Hill of Hope

What sinister purpose lurks behind Alicia’s current project:a long, difficult trip upstream through a winding canal? And why must Akari row the whole way there?

Aika becomes a journeyman before Akari. I don’t know if this is because she’s actually more suited to the job (she certainly lacks Akari’s comprehensive ignorance of such matters as canal locks) or just because she’s been training longer.

There is some interesting business with gloves: apprentices wear two, journeymen one and Undines none at all. There’s a reason: 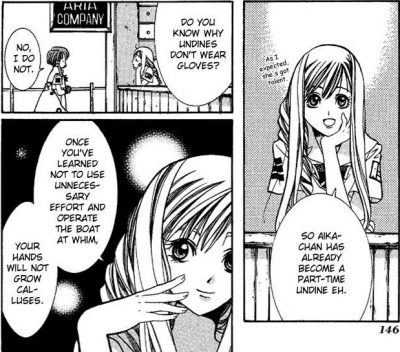 A note about the title: only the first two volumes are called Aqua. After that, the title was changed to Aria.

The art is often beautiful, so I was rather surprised to discover that there have been extensive audio adaptations of Aqua and Aria. I am very curious how one adapts a work so focused on the visual into one with no visual element at all. Unsurprisingly, the audio plays appear to be in Japanese, so I will probably never know.

Unlike a lot of series that (for no discernible reason) mix, say, faster than light ships, advanced AIs, and robots with mining techniques any Mostyn miner would recognize , Aqua has a perfectly good explanation why a civilization that seems to have anti-gravity would bother with gondolas. That reason is, this is a stonking rich civilization and it pleases them to use gondolas. In fact, a sufficient number of people are pleased to be rowed about by attractive, single women that the women can make a living doing it. Which makes me wonder if Undines are essentially futuristic geisha.

It’s an interesting world and I will definitely be exploring it further.

A version of Aqua Volume One is available here.