British by birth, Canadian by choice, Michael Greatrex Coney seems to be comparatively obscure now, a decade after his death. A shame, because he wrote some interesting, unusual books over the course of his career. Perhaps his finest was the coming-of-age novel Hello Summer, Goodbye.

Alika-Drove, native to a world with both extreme obliquity and orbital eccentricity, accepts as normal its annual extremes. It is, after all, the only world he and his people have ever experienced. For Drove, chaffing at the childish restrictions he feels old enough to flout, his odd little world is a mundane backdrop to what will probably be just another boring summer in the isolated fishing community of Pallahaxi.

Pallahaxi is not entirely without promise. It is the home of Pallahaxi-Browneyes, a young woman Drove’s age with whom Drove is smitten, a young woman Drove could not work up the courage to address until the previous summer was almost over. But this summer will be completely different!

In fact, if Drove plays his cards right, he may spend the rest of his life with Browneyes.

Tavern-owner’s-daughter Browneyes is hardly an ideal companion for Drove in the eyes of his parents, but a town as small as Pallahaxi makes it hard to maintain class barriers. In any case, Drove holds both his socially-conscious mother and government functionary father in contempt. Their disapproval only makes his fumbling romance with Browneyes that much sweeter.

Of course, there are complications. Despite himself, Drove seems to spend more time with pretty Ribbon than Browneyes approves. The pointless war between Drove’s homeland Erto and its neighbour Asta, once distant and irrelevant, is starting to bend life in Pallahaxi out of its usual shape. Parliament’s diktats to Pallahaxi may be in the name of national defence, but their effect is to drive a wedge between rulers and the ruled, between people like Drove’s parents and people like Browneyes’ parents.

And what summer romance ever survives winter’s chill?

This really should have been one of my Because My Tears are Delicious to You reviews. The reason it isn’t is because I did not encounter this book when it was published but only decades later, when Jo Walton was kind enough to point it out to me. In fact, she was the reason I discovered Coney’s books in the first place.

I have no excuse. Yes, some of his covers were dismal 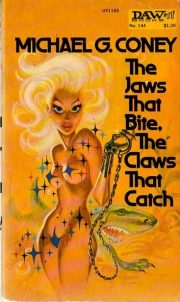 but dismal covers on good books were and are a reality.You would have to be a pretty sad puppy to think otherwise.

The 1978 Pan edition I own is only 192 pages long, short by modern standards. Brevity is no limitation for Coney; tension escalates at an increasing pace throughout the short novel as it strides from a wartime holiday novel to the apocalypse. When the novel begins, Drove’s biggest problems are his desire for independence from the parents he despises and companionship with the woman with whom he is infatuated. In the end, his problems … are actually the same but the transformed context means the stakes are life and death.

The most remarkable aspect of the novel is its ending: Drove suddenly finds an entirely new lens through which to consider established events. All of the facts he assembles have familiar but Drove has a key insight the adults, too locked into conventional views, could never have reached. The last two pages of the book are a turn of the kaleidoscope, transforming the familiar and expected into something new and surprising.

Hello Summer, Goodbye can be purchased here, if you’re in the UK. Tesseract still offers their edition to North Americans, under the title Pallahaxi Tide. 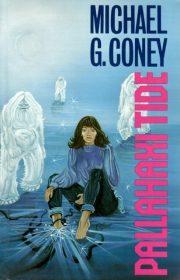 Be warned that the book description on Amazon and on Tesseract’s own page contains an egregious spoiler.

Hello Summer, Goodbye was also published by DAW as Rax. 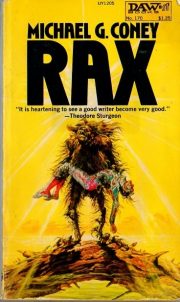 Readers may find this interview with Coney of interest.