Although her publisher is presenting it as the first volume of a new two-book arc, 2016’s The Edge of Worlds is also the fourth volume in Martha Wells Books of the Raksura series. It takes place in the same Three Worlds setting as her previous Raksura books.

Consort Moon and the other members of the Indigo Cloud court waken simultaneously, disturbed by a shared dream. The meaning of the dream is unclear. Is it merely a rare side effect of the Raksura mental gifts … or is it a portent of doom to come? The court does not have long to ponder this before groundling strangers appear, led by a someone they know: Gold Islander Delin.

The groundlings with Delin come from the Empire of Kish, a diverse and powerful polity located some distance from the Reaches. The Three Worlds (the setting that all races inhabit) are ancient; their history is more forgotten than remembered. Enigmatic relics of lost cultures litter the landscape. A magically sealed city, recently revealed, is one such relic, one for which the Empire requests the Indigo Cloud court’s help.

It makes sense to turn to the Raksura in such matters. Although the details are very unclear, both the Raksura and their malevolent cousins the Fell are related in some way to the forerunners, one of the many lost races of this world. Moreover, the Indigo Cloud has personal experience of forcing entry into sealed forerunner cities. Indeed, the Indigo Cloud has enough such experience to know that is a terrible idea to enter sealed cities: they were generally sealed for a good reason. The court was lucky to survive their last encounter with such a city.

The visitors agree that the sensible course of action might be to ignore the new city, but, they explain, that’s not really an option in this case. Fell have been seen lurking near the hidden city, even though it is nowhere near the Fell’s usual range. If Raksura can gain entry, so too may their cousins the Fell. There is reason to think the city contains a terrible weapon. If Moon and his companions do not secure it, it may fall into Fell claws.

The book is reasonably clear about this volume being the first part of a series but just in case; I will repeat: this is part one of a two-book arc. 2017 will see the publication of The Harbors of the Sun 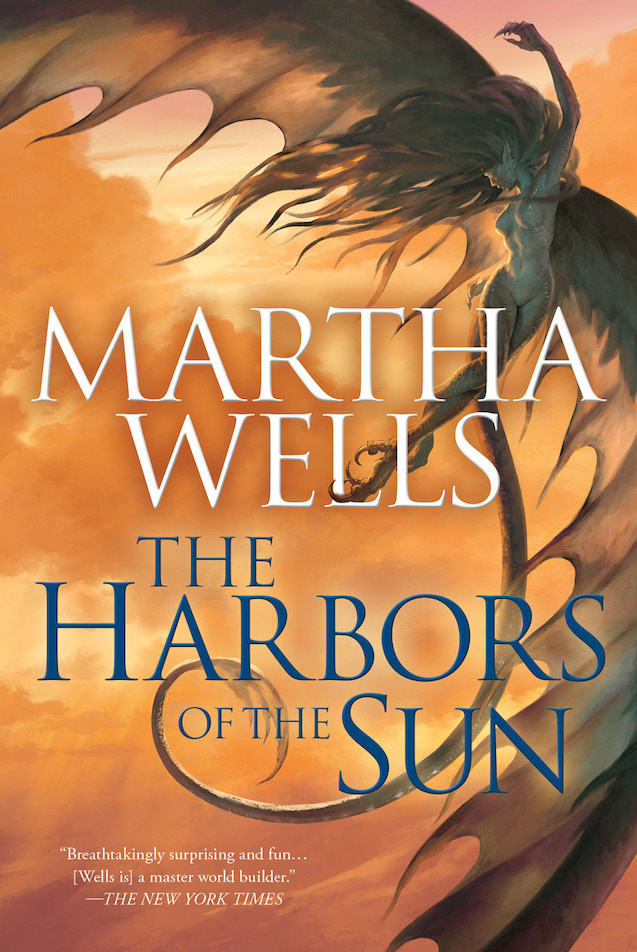 which is advertised asproviding the conclusion both to this arc and the Books of the Raksura in general. Be aware, then, that this particular volume ends on something of a cliffhanger.

The Three Worlds reminds me in a weird way of Andre Norton’s Forerunner universe. It’s not just that both settings use the term ​“forerunners.” Both worlds have seen many, many civilizations rise and fall. Both worlds have forgotten most of their history. Both worlds contain archaeological sites that any sensible person would drop a hellburner on rather than enter. Not that anyone is that sensible.

The Three Worlds’ mean encephalization quotient seems to be significantly higher than present day Earth’s. It’s not just that the Raksura are only one branch of a cladistic tree bushier than present-day hominids (where a measly single twig persists, at least for the moment, of all the hominids that once walked the Earth). There are also intelligences from lineages unrelated 1 to the Raksura, Fell, and groundlings. I wonder if this diversity contributes to the churn-rate the various civilizations have experienced.

The Raksura tend to live off by themselves, not mixing much with the other peoples of the Three Worlds. This is probably because many Three Worlders confuse them with the (almost always) chaotic evil Fell. Still, as the Kish embassy to the Raksura shows, the several races, cultures, and states do not live completely segregated lives. One impetus for cooperation is the dastardly nature of the Fell; this gives the other races good reason to come together for trade and common defense.

There are strong hints in this book that the Fell are predators by choice and not by nature. There is at least one group of Fell out there who are trying to fumble their way to a less malevolent lifestyle. Pity that none of their neighbors are willing to offer pointers. But … given the Fell fondness for subterfuge and lies, I can understand why nobody is willing to give any Fell a helping hand.

As this volume shows, the Fell are NOT the most dangerous things in the Three Worlds. There’s something powerful mean in that sealed city. It may be that the Raksura will have to work with the Fell to protect the world from something much worse. Or perhaps distrust and loathing cannot be ignored, in which case the world may very well be doomed.

The Edge of Worlds  is available here.

1: I am assuming the Three Worlds are just as old as our Earth, and that the basic evolutionary processes are more or less the same. If that is the case, then, strictly speaking, the things in the sea and the humanoid races do have a common ancestor, but only in the sense that apes and octopuses do. The split took place  a very long time ago.