Volume Eight of Ashinano’s Yokohama Kaidashi Kikō covers more than a year in the lives of the character. It’s more … um, ​“action filled” is the wrong term… informative about the setting than were previous volumes.

Walking across Japan, on her way from one job to another, Alpha decides to visit the local capital. She discovers that the town is deserted when the Diet is not in session. Heading on, she crosses the desolate Japanese landscape.

The theme of this section is ​“there are almost no people left, and nobody is maintaining the infrastructure.” Roads are almost impassable and Alpha encounters very few people. Let’s hope she does not break a leg somewhere out in the wild.

Lost in the wilderness, Alpha stumbles over one of the few functioning airports in this empty world. This grants Alpha the unexpected opportunity to see an actual working airplane. And something else, something unexpected. A male robot.

It’s interesting that while Alpha was owned, the male robot is the adopted son of the woman who operates the airport.

Watching the airplane land is exciting enough, but its pilot is the first male robot Alpha has ever met.

I thought the robot was flying a Zero. 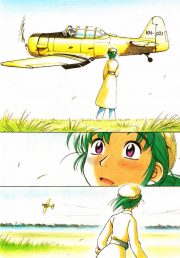 It’s a T‑6 Texan, which I guess has been used in place of Zeros in film. I am sure that is why I was confused; it cannot be that I can’t really tell one plane of that vintage from another.

Alpha learns the name of her new acquaintance — Nai — and compares notes with him.

Nai is a confusing name choice; there’s a bit of a ​“who’s on first” conversation because of it.

Nai may be the only surviving male robot. For reasons left unexplained, male robots are reportedly short lived. This makes Nai a curiosity, a status he does not much enjoy.

Although it is an ancient design, Nai’s T‑6 has been upgraded to allow robots to interface with the plane. As a consequence, Alpha’s first flight is particularly memorable.

Odd rumours inspire Alpha to explore a run-down road. Sure enough, she finds the source of the rumours: luminescent plants apparently modeled on streetlights.

I am going to credit a bored genetic engineer for the lamp trees.

Takahiro and Matsuki spend the day together; Takahiro is granted the enormous privilege of being Matsuki’s driver.

They bicker and insult each other like an old couple, which I guess in their frame of reference they are. Although I am not totally sure they see themselves as a couple, exactly. Yet.

Alpha does not change with time but the kids certainly do. Matsuki has grown quite a bit since we first saw her.

One gets the sense that however rewarding her present job, she misses her home. Even if her old location is much less trafficked than her present one. 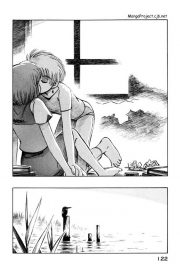 Kokone is not much mpressed with her client’s technique. 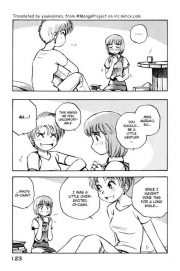 Maruko for her part is displeased to discover that Alpha, whom she sees as her rival, has attracted both Kokone and Nai.

I suspect the coming robot civilization will have entire romantic sagas, tragic and otherwise, driven by some nerd’s decision to design robots so that they had to make out to exchange files.

Hmmm. The lack of robot wifi or even an IR link is part and parcel with the whole absence of any sort of long-range communication.

Not that she had any choice about stopping. It’s not as if she’s fireproof.

Alpha shares a roasted chestnut with a fellow traveler.

Those are very large chestnuts, the size of a gourd? Mistranslation or genetic engineering?

When we lived in Brazil, our neighbours would toss large nuts into camp fires as inexpensive fireworks. It never occurred to any of us to do what Alpha’s new friend does: set up some sort of shield to protect us from shrapnel. In retrospect, that would have avoided at least one serious burn.…

This provides a lot more detail on the general state of Japan in this future: run-down and empty. There’s evidence for some level of development, because somewhere someone is making cameras and parts for the scooter, but it is unclear where that is. Still, as Alpha says, on a human (or robot) scale, Japan is big. Lots of room for small factory towns off Alpha’s path.

What’s still unclear is how the world got this way. With the series more than half over, I am not expecting answers.