For all my twitterings about books by women, my library has some major gaps. For example, almost of all of my books on spaceflight are by men. Almost all. I was delighted to find that my library had a copy of Amy Shira Teitel’s Breaking the Chains of Gravity: The Story of Space Flight before NASA , a copythat I had not even read .

Teitel aims to show that NASA did not spring into existence from the primordial ooze, already charged with the mission of landing a man on the Moon and returning him safely to Earth. Before NASA, there was NACA, National Advisory Committee for Aeronautics. NACA’s transformation into NASA was the fortuitous consequence of a long series of events, not least of which was an inadvertent omission in the terms of surrender Germany signed at the end of WWI

Those terms prevented Germany from rebuilding their armed forces with conventional armaments. They did not forbid rocketry … which at the time was a hobby for suicidal technogeeks. Germany’s amateur rocketeers might have been nearly as dangerous to their neighbours as they were to themselves, but their experiments suggested that there was a whole class of potential weapons not inconveniently limited by treaty. Eager for funding, researchers like von Braun and Dornberger came to terms with the Nazi regime then ruling Germany: their expertise in exchange for funding.

As we know, the war situation then developed not necessarily to Germany’s advantage. Afterward, Von Braun and company were able to convince the US that their technical skills were valuable enough to justify overlooking their war records.

As Teitel reminds us, the history of rocketry between VE Day and Sputnik was a history of missiles rather than of actual space flight. Ultimately, while the US had orbital ambitions, they were frustrated by politics and bad luck. It was not the world’s industrial and military giant that put a Sputnik into orbit, but a bitter rival, the Soviets. After that, things happened, one of which was NASA.

I wish I had liked this book more than I did.

Teitel takes a sunnier view of certain programs mentioned in Paul Drye’s False Steps: The Space Race as it Might Have Been than Drye did. Well, it’s always interesting to see another perspective. Even if I suspect it’s wrong.

It’s a bad sign when a non-fiction book’s opening chapter reminds me of Davin’s egregiously flawed Partners in Wonder: Women and the Birth of Science Fiction 1926 – 1965 . I’ve literally never encountered anyone who thought NASA just appeared, Moon Mission in hand. A text on the prehistory of American spaceflight is worth having, but who exactly is unaware that there was a prehistory? Teitel seems to be arguing with a strawman.

As a Canadian, I tend to complain whenever a book focuses relentlessly on the US and ignores the rest of the world. I was revving up to complain of this book but found myself stymied. Teitel, apparently fearing that her book would be too damn long, limits herself to foreign ventures that helped shape US efforts, and ignores a) other foreign ventures and b) pre-NASA American rocket enthusiasts such as Goddard.

As a consequence, this book is less the story of spaceflight and more the story of how von Braun and his pals traded their expertise to anyone willing to provide funding (and refrain from hanging them for war crimes). Moreover, while the author acknowledges that von Braun was a member of the SS and that he tolerated horrific working conditions for his slave labourers, it seemed that she tried to soft-pedal the more unsavoury aspects of German rocket research 1.

The book takes its title from a von Braun quotation:

It [the rocket] will free man from his remaining chains, the chains of gravity which still tie him to this planet. It will open to him the gates of heaven 2 .

Lamentably, crewed spaceflight remains impractically expensive for all but a few. I will give von Braun this: his willing participation in the German war effort certainly opened the gates of heaven for nine thousand Allied civilians and soldiers, along with twelve thousand slave labourers.

Breaking the Chains of Gravity is available here.

1: Oberth showed some ingenuity in discovering the manoeuvre dubbed the Oberth Effect, but his politics remained unreconstructed Nazi until he died.

2: Huh. I wonder if that is where Paul Preuss got the title for his book. 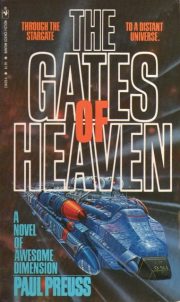