Once more into Hitoshi Ashinano's Yokohama Kaidashi Kikō! But at a cost; at my present rate I will finished the whole series well before August is over. I should have picked some lengthier manga series on which to fixate.

Alpha dreams of the day that she and her owner parted ways.

For some reason I assumed Alpha was left behind by her owner. Not so: she chose to remain behind.

For some other reason I also assumed that her owner was male but it has been pointed out to me that there is no evidence of this.

Alpha, Matsuki, and the others gather for a brief visit from an old friend.

Takahiro is never returning home. Not even for Matsuki....

Ojisan is still alive. Go him!

Recapitulating something from an early episode, Alpha watches the first dawn of the year. This year's dawn is not like that year's dawn and not just because Takahiro is not with her.

Alpha agrees to let Matsuki work for her. Well, except there's nothing to do at the cafe and Alpha won't actually pay her.

I misread this story title as “Ready, Lady, Go!” 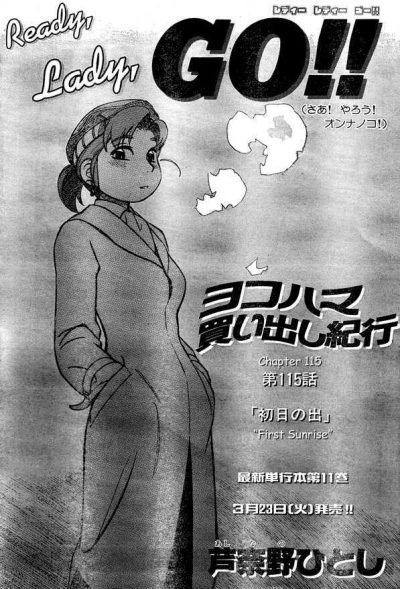 I guess that's not really an Ashinano-style title.

When Alpha told Matsuki the terms of her employment, I thought “Oh, look. Alpha has re-invented the idea of interns.” Then I looked at the final panel.... 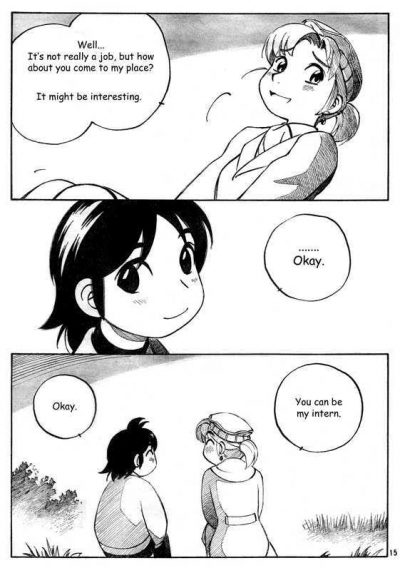 Beneath the Pine Tree

Ojisan and Sensei discuss what it is like to be old and alone, Ojisan because he is a widower (or possibly divorced) and Sensei because she has always been a loner. The important thing is neither one of them will have the time to do all the things they want to do.

I think this conversation 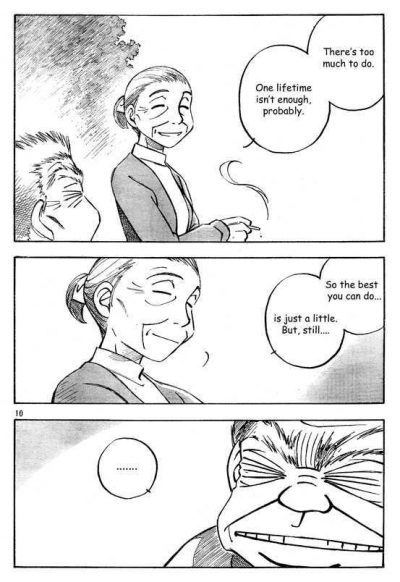 could be inspirational or depressing. I am going to opt for “After reading this, I was so depressed I could not blink,” but I can see how someone could go a different direction.

Alpha will live much, much longer than either Ojisan or Sensei but I suspect in the end the set of all things she could have done will still be much, much larger than the things she did. It's the nature of one life lived in a single body....

Alpha teaches Matsuki how to drive a scooter! Matsuki resolves to save her money until she can buy one! Which, because she is not paid, will take her some time!

Alpha's description of what it is like to drive a scooter is very much like what it was like to fly the ekranoplan.Human experiences are probably only a pale reflection of Alpha's rich suite of robotic senses.

Alpha discovers the dreadful conditions under which Maruko works.

Even in a twilight age when humanity is dying out, women will be forced to flirt with customers. It does shed a different light on the way Maruko treats Kokone (an even less flattering light). Other customers come back for the smiles; Markuko demands hot make-out sessions with Kokone.

Alpha had absolutely no idea that robots were allowed to take surnames other than those of their owners until Maruko revealed that she had changed her name to Maruko Maruko. I guess each owner is allowed to educate their robot as they see fit. I sense that there could be a whole dystopia going on just out of frame.

We. Are. All. Doomed. But humans are doomed on much shorter timescales than robots. Alpha is painfully aware of that.

Alpha contemplates the ruins of a flooded town.

Maruko versus Alpha in break-neck racing thrills! WHO! WILL! WIN!

Top speed of a scooter is what, 50 km/hr hour? So maybe not the Indy 500. Also, it turns out that, in this twilight world, it’s hard to keep track of who actually wins.

This volume seemed even more steeped in impending mortality than previous ones. Which, since this is about the slow, inevitable extinction of the human race, is saying something.

I am almost finished with the series, which makes me sad. People have been kind enough to suggest some possible replacements, of which Kabu no Isaki, Kotonoba Drive, Neko Musume Michikusa Nikki,andAriaare just a few[1]. One of those will be a worthy replacement, I am sure.

1: Nobody ever suggests Nana to Kaoru, although it seems like it's bound to please.