Like Masuji Ibuse, Keiji Nakazawa (1939 – 2012) was a native of Hiroshima. Unlike Ibuse, Nakazawa was in Hiroshima on August sixth, 1945 and while he and his mother survived the destruction of Hiroshima, his father, two sisters and younger brother died as a result of it. Nakazawa’s manga series Barefoot Gen is a thinly veiled autobiographical work, telling the story of the destruction of Hiroshima and the immediate aftermath from a small boy named Gen, just the same age the author was when Hiroshima was destroyed.

The Nakaokas – Daikichi, his pregnant wife Kimie, six-year-old Gen, daughter Eiko, younger son Shinji – live as happy a life as one can in wartime Japan. Food is short and hunger ever present but unlike those two poor bastards over in Grave of the Fireflies, Gen, Eiko and Shinji have loving parents to care for them and at least Hiroshima has been spared the worst of the direct effects of the war, almost as though the Americans were reserving Hiroshima for some special purpose. In the adaptation, the Bomb isn’t dropped until about half an hour into this 85 minute movie; the viewer gets a good idea of what is going to be lost.

Eiko is depicted in a manner that suggests her character has a supernatural premonition of what is to come (or she’s been listening too closely to her father’s worried speculation that the reason Hiroshima was spared conventional bombing was to reserve it for a particular purpose).

On August sixth at about 8:15 AM the Enola Gay releases its atomic bomb over Hiroshima. Gen, walking to school with a friend, sees the release but by pure chance happens to crouch down to pick something up from the ground just as the bomb detonates. A low wall protects him from the flash. His companion is not so fortunate but it seems unlikely – given the expression on the half of her face that remains – that she processes what just happened before the blast kills her and tosses Gen a considerable distance. 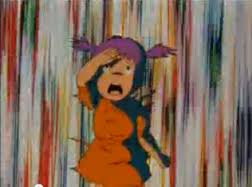 TV Tropes has an entry for Barefoot Gen under Nightmare Fuel. They advise viewers stop watching as soon as this image comes on the screen and I would have to agree. The three minutes immediately after the Bomb detonates offer a rich sampler of all the ways people can be killed by the prompt effects of a comparatively puny, inefficient nuclear device.

Gen’s entire family also survives the immediate effects of the Bomb; Daikichi, Eiko and Shinji nestled safely under the ruins of their home and Kimie just outside it. This means that instead of dying instantly or at least quickly, Daikichi, Eiko and Shinji are slowly burned alive as Gen and Kimie watch, unable to rescue their relatives. This is all pretty horrible and still not the worst that could happen to someone in Hiroshima on that particular August sixth.

Gen and his mother survive the firestorm and we get to see their struggle to survive the next two weeks; their situation is made that much more difficult when Kimie gives birth to baby girl Tomiko and by Gen and Kimie’s decision to take in Ryuta, a boy about Shinji’s age whose family was killed in the blast and firestorm. Not only is food in even shorter supply than it was and not only is shelter hard to come by but it becomes obvious that Tomiko is slowly starving to death and Gen got a significant dose of radiation.

The anime I watched is the 1983 Mori Masaki version. The main cast was

Thanks to the implosion in the video rental business, I was unable to rent any version of Barefoot Gen and I didn’t find a copy of the DVD to buy in time for this review. In fact, I was going to give up when I remembered I had an old VHS tape of it and a working VCR. The sacrifices I make.

The art in this is typical for the time and the animation itself is fairly simple. To modern eyes, this could even seem a little crude. I think the art suits the subject matter – hyper-realism would not be the viewer’s friend; even the stylized depiction of the many terrible fates available for someone in Hiroshima1 is pretty horrific.

When I first watched this decades ago, I thought there was an odd mismatch between the art, suitable for children’s entertainment, the events we see, suitable for children whose parents never want their kids to sleep again, and Gen’s reaction to those events. In the face of everything he loses and all his setbacks, he is not just resolutely determined not just to survive and to save as many of his friends and family as circumstances allow2 but often even cheerful. In retrospect, I wasn’t familiar enough with the art of anime at the time to have an opinion, the events are inherently horrible and there were so many ways for someone to give up and die in Hiroshima that if Gen (and the person he was based on) didn’t have a particular kind of character, both protagonist and author would have been just more causalities of Hiroshima.

I think the Geneon DVD of this is still available but I can’t seem to find a direct source to link to.