Wait! Are you confused yet? As my editor was confused? ​“You already reviewed Full Metal Alchemist!” Yes, but I reviewed the second volume in the series, not the first. Which was checked out and never returned to Kitchener Public Library.

On a war-wracked continent, two young brothers wander from town to town. Although Edward Elric is only fifteen and Alphonse Elric is just fourteen, both are skilled alchemists. Indeed, their skill is only outmatched by their boldness, which is why they are searching for the Philosopher’s Stone.


This volume has a number of short adventures. Since the chapter headings don’t map 1:1 onto the stories, I am going to improvise.

All Lior is abuzz with talk of Father Cornello, emissary of the Sun God. Whereas other supposed prophets might be mere con men, Cornello appears to be able to work genuine miracles. Ed is certain this can only mean that Cornello is using alchemy. How Cornello manages to side-step the basic law of alchemy, equivalent exchange, is not clear.

Ed may be on to something, because Cornello’s immediate reaction to hearing the Elric brothers are interested in his work is to order their deaths.…

Foolish Cornello: you should know you cannot kill the protagonists in the first volume of their adventures. Well, not unless the hero is named Boston Brand.

The quest for a hot meal and a soft bed draws Ed into the struggle between the hard-working citizens of a mining town and the corrupt official who owns that town.

Ed turns out to be a rules lawyer in addition to being an alchemist. Of course, his belief that he could think his way around legal obstructions is why he is a double-amputee and Alneeds a whole new body.…

“Battle on the Train”

Terrorists/freedom fighters have the bad luck to target the very train on which the Elric brothers are travelling.

I guess ​“Die Hard on a Train” had already been used as a title.…

The brothers consult Shou Tucker, a master of biological alchemy. What they learn doesn’t get them any closer to new body parts. It does provide them with a memorable lesson in how far some alchemists will go in the name of research.

“The Right Hand of Destruction” & ​“After the Rain”

The mysterious terrorist Scar denies the state the opportunity to punish Tucker for his crimes.

Scar’s quest is to rid the world of alchemy by ridding it of alchemists. He’s not interested in killing the Elric brothers specifically, but if the opportunity presents itself.…

It’s arguable that what Scar actually did was ensure Tucker’s punishment. Otherwise the miscreant might have just been recruited for some off-the-books research project (Nazi rocket scientists for ten points). Scar’s grudge against alchemists goes back to the time that alchemists working for the state ended the Ishbalan Civil War by committing genocide. It’s understandable that he might not trust the state to punish skeevy alchemists.

The brothers learn about the genocide from their friends and allies, who happen to be the same people who committed said genocide. We cannot know if the alchemists resisted the order, but we do know that ultimately they obeyed it.

“The Road of Hope”

En route to get their prosthetics repaired, the brothers stumble over the key to their grand quest.

Much to Al’s irritation — he’s fifteen, he spends a lot of time irritated — he and Ed are joined by Major Armstrong, a comic relief character who never misses a chance to dramatically remove his shirt. 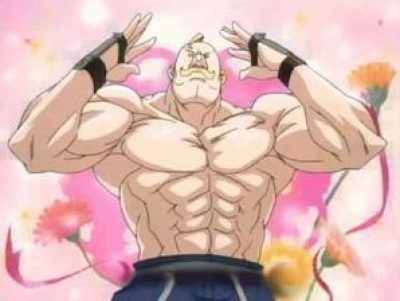 I did wonder how much money he has to spend replacing ripped shirts, but then I remembered that alchemists can repair inanimate objects.

Armstrong is also one of the alchemists who carried out the Ishbalan genocide, so he’s not entirely a comic figure.

“A Home with a Family Waiting”

In which we meet Winry, who is both Ed’s long-suffering mechanic and probably his future love interest. There’s no real evidence that Ed deserves such smart, capable lady.

An issue that has been mentioned in manga but not so much in Western comics: prosthetics require maintenance and adjustments. Particularly if the person with them is growing; Ed’s still a shrimp but in the time since he last saw Winry, his living leg has slightly outgrown the mechanical one.

It probably won’t matter that one of the bolts from Ed’s arm was not reinstalled. It’s not like there’s some dramatic rule of thumb re to the importance of details like a gun on the wall or a missing bolt.

The brothers visit the state library where they hope to find notes on the Philosopher’s Stone, only to discover that the library burned to the ground in the recent past. More accurately, was burned to the ground, not that the brothers know that. It seems that all hope is lost. But wait! They encounter a librarian who just happens to have some odd skills.

As it turns out, ignorance was bliss.

“The Two Guardians” & ​“The Definition of Human”

Horrified at what they now know about Philosopher’s Stones, the brothers are determined to find out more about one past effort to create one. The path takes them to a government facility, and two very special guardians.

And this takes the story to where I first encountered it here.

Ed has an impressive skill set, which is offset by the risk-assessment abilities of a pubescent teenaged boy [2]. Despite being slightly younger, Al seems more sensible; I wonder if he was always more grounded than Ed. Or is it because a soul in a metal body doesn’t have to deal with the hormonal turmoil of a body that’s rewiring itself?

Arakawa is pretty good at giving readers the information they need when they need it (which made it possible for me to read the second volume out of order) but I have to admit that the series makes so much more sense if one starts from the beginning. I am definitely going to track down the rest of the series [3] to see where Arakawa takes the story.

1: It still bothers me that they use volume both to denote 1) omnibus volume and 2) issue number.

3: I did cheat and look up the Wikipedia entry for a specific character, just to make sure that her encounter with the brothers didn’t ensure her doom.