2014’s Sand of Bone has a very pretty cover, which is missing one crucial detail. I wish author Blair MacGregor’s publishers had seen fit to highlight the fact that this is volume one in the Desert Rising series[1].

The kingdoms along the Great River, not the least of which is SheyKala, are ruled by the Velshaan, a lineage that can quite rightly claim to be descended from the gods themselves. Judging by the lamentable history of the Velshaan, divine ancestry confers no particular wisdom. The gift of quasi-immortality seems to be coupled with a massive sense of entitlement, an entitlement that blinds the Velshaan to the consequences of their actions.

Only nineteen generations after the founding of the Velshaan, the semi-divine autocrats are much reduced. The Woes, a particularly unpleasant civil war, reduced the SheyKala Velshaan to a handful of survivors. Crucial bodies of knowledge, in particular knowledge of the elemental magic called Iasone, have been lost along with their practitioners. The Velshaan still maintain their brutal rule over the region, but they are painfully aware they are not what they once were.

Young Raskah believes that certain old documents he possesses are the key to recovering Iasone. He has good reason to believe in the documents, as he already has begun to master the simpler techniques. The danger inherent in this sort of autodidact study is that the uninformed, self-guided student may fall victim to certain avoidable hazards. In this case, the magic demands a physical price; it is also driving Raskah mad.

Autocratic systems are not known for their ability to moderate the more unfortunate behavior of their rulers. In Raskah’s case, his family feels that the chance he will manage to recover Iasone justifies overlooking or even facilitating some pretty extreme behavior. When Raskah convinced himself that the path to Iasone required an incestuous marriage to his sister Syrina, the family not only gave their blessing to the union, but exiled Syrina to a forbidding prison, the Salt Hold, for refusing her brother.

Salt Hold is the only oasis in an uninhabitable wasteland. Prison walls are not needed; the desert is prison enough. The old fort is the oubliette for those who do not quite qualify for execution. Pardons are rare; few prisoners return from this gehenna. Syrina, however, finds it a refuge. Confinement has given her leisure to study certain mystical tomes she filched from her former home.

Quite unexpectedly, the soldiers with whom she is exiled grant her an entirely different learning experience; the chance to become someone worth following for reasons other than being descended from gods.

While semi-divine incest is acceptable, Raskah is very careful to keep secret his little hobby of making hopefuls, military trainees, fight each other to a bloody standstill. He then kills or mutilates the survivors, which is bad. When two of her most promising students fall victim to Raskar’s hobby, abrasive Comdar Shella makes the mistake of openly protesting. Her claims are viewed as sedition; her demonstration of loyalty to the regime is rewarded with a beating before being consigned to a slow a death by exposure in the desert.

Unfortunately for Shella, there are great powers interested in reforming the Velshaan and those powers still have a use for Shella. The desert will not release Shella from her duty. Death itself will not free her.

I would have to think long and hard before I could come up with a fictional example of divine rule that functioned efficiently and justly [2]. It would be easy to make a long list of divine realms that were wretched dystopias. Dystopias so terrible that they would justify revolution followed by show trials and mass executions for the former aristocracy. That said, even by the standards of demigods the Velshaan seem particularly tumbrel-friendly. It’s true that they cannot be killed save by other Velshaan (or the desert), but I think a properly motivated revolutionary court system would just consider that a challenge.

Someone as familiar with the field as I am, someone who is aware that this is the first book in a closely-linked series, someone who is familiar with a genre whose conventions are well established … that someone will be able to predict the general form of the various plot developments that will have to take place. We will see: establishing that the antagonist is a very evil antagonist indeed (check); giving the protagonist a narrative arc (check), and one that doesn’t end with her using the mandate of heaven to reduce primary antagonist to soot at the end of book one (check). That would end the series prematurely.

MacGregor uses various methods to avoid what for the sake of diplomacy I will call David Eddings Syndrome, that feeling you’ve already read the brand new book in your hand. Although Raskah and Syrina and the rest of their unlovable kin are familiar types, a lot of the book focuses on the unfortunate mortal bastards who get caught up in the gears of the plot. The Velshaan may be nigh-invulnerable but their subjects are not. MacGregor provides the reader with a fair tour of the consequences of associating with demigods, from painful death to crippling mutilation, from divided loyalties to post-traumatic stress disorder and suicidal survivor’s guilt.

It’s important to read this book with the notion in mind that it’s just the beginning of the story. It functions perfectly well as the introduction to the setting, the characters and the on-going conflicts roiling this world. It doesn’t really provide closure, but, as the first book in the sort of series of which it is the first book, it’s not supposed to.

My suspicion is that the series won’t end with the overthrow of the Velshaan and the establishment of proper democratic institutions moderated by the usual system of checks and balances. Even so, I still want to see what happens next.

Sand of Bone may be purchased here.

1: It’s on the cover of the second volume: 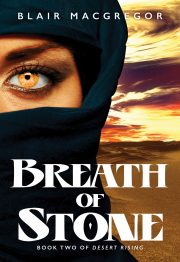 2: Where justice isn’t defined as ​“we kick you in the head for as long as it pleases us to do so and you get to thank us for every kick.”