Academy City! Home to the reality-redefining espers, able to alter natural law at will and filled with scientific marvels! For student Touma Kamijou, it is merely the setting of the endless series of humiliations, failures, and mishaps that is his life. His school marks are dismal and accidents dog his heels. His esper power, Imagine Breaker, the ability to negate all unnatural powers, is1 dismissed as Level Zero, the very lowest of rating in Academy City.

There is no situation a personality quirk cannot make worse. For Touma that quirk is his tendency to step in whenever some else is in trouble. When we meet him, he is fleeing a band of delinquents whom he is trying to lead away from the middle-school girl they were harassing. Not for her sake but theirs; Touma recognizes her as Mikoto Misaka, the girl Touma calls ​“Biri Biri”, an irritable electrokinetic who is one of the most powerful espers in Academy City. Touma is willing to risk a beating if it will keep strangers safe from her.

Returning home after another pointless confrontation with Biri Biri, who is perpetually annoyed that Touma can casually block her most powerful attacks, Touma finds a young nun draped over the railing of his balcony. Of course Touma helps her, an act of charity that will cost him very dearly.

Although none of the students in Academy City are aware of this, ESP is not the only path to superhuman power. Few people can become espers but anyone who is not an esper can use magic. However, magic is inherently dangerous, both for the magic user and the people unfortunate enough to be near them when they lose control.

Aware of the horrific consequences should magic become better known, the Church of England created the Index Librorum Prohibitorum, within which 103,000 forbidden magical grimoires are hidden. The Index not an object but a person, the nun Touma found on his balcony. Although Index herself has been assured she cannot personally use the information occupying most of her memory, others can, others like the two powerful sorcerers who were chasing Index across rooftops of Academy City when Index fell onto Touma’s balcony.

Except … Index’s memories only go back a year and there’s a lot that she does not understand about her situation. Her pursuers, Stiyl and Kanzaki, appear casually murderous but they are not the antagonists they seem to be. In fact, they are Index’s dear friends, determined to save Index from a deadline she has no idea exists. When the pair catches up to the nun in Academy City, that deadline is just hours away.

And standing between Stiyl and Kanzaki and the salvation of their dear friend Index is a misinformed but resolute teenager named Touma Kamijou.…

When I say ​“appear casually murderous”, in Stiyl’s case that’s because he is; there’s some fairly graphic detail about what his fire magic can do to a human body and he seems pretty comfortable with the idea of reducing Touma to a layer of fatty ash on the walls. ​“With great power comes thoughtful moderation” isn’t really a theme in these books, although Kanzaki is reluctant to kill innocent bystanders without giving them a chance to run away. This is not peculiar to the mages; powerful espers are just as keen to use disproportionate force as the sorcerers and while this book does not get into it, the people running Academy City are even worse.

Persons of certain religious tendencies should go into this with the warning that not only are these books set in a world where powers, natural and unnatural, have rewritten reality many times over, the books are not in any particular way inhibited by a desire for detailed verisimilitude concerning the minutiae of Christianity and this only gets more pronounced later in the series: 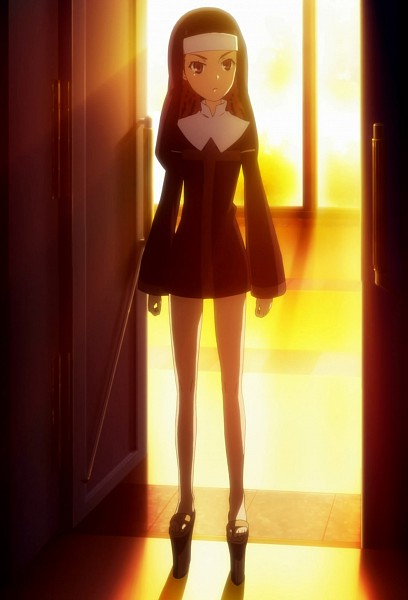 I will say I really liked the idea of the Walking Church, clothing that gives the bearer all the religious benefits of being in a cathedral (along with substantial defenses against damage). Shame that pretty much the first test the mutually skeptical Touma and Index can think of is to have him place his power-negating hand on Index’s Walking Church robes to see what happens.

Touma’s Imagine Breaker is very specific; using his right hand only, he has to touch the effect he wants to cancel and his power only affects ​“unnatural” abilities. This makes him absurdly powerful in certain circumstances and extremely vulnerable in others. Unlike the majority of the espers and sorcerers, he’s painfully aware of his own limits2, which forces him to be more aware of his surroundings and more creative than most of his opponents.

Many of the explanations in this series make no sense; I am going to assume a lot of that is because the people in power lie endlessly. Touma sees through one of the more blatant lies fairly quickly. Other lies are exposed when they are put to the physical test. I am also going to assume that two top sorcerers like Stiyl and Kanzaki failed to do a trivial bit of math (disproving one of the more important lies) not because the author was writing an idiot plot, but because the eldrich nature of magic means many sorcerers are terrible at simple calculations. This would be easy enough to test just by habitually short-changing wizards.

I first encountered this as an anime and was amused enough to watch entire seasons about the war between what TV Tropes calls ​“Magic and Techno Babble”.Unfortunately, this volume’s prose is often pretty clumsy. I have no idea what the original text is like but Andrew Prowse and Yoshito Hinton’s version of it is often … unfortunate. It was a good thing that I had a reservoir of fondness built up from the anime. I know where the series is headed and plan to try future volumes in the hope the translation becomes more felicitous.