Aliette De Bodard’s 2010 novel, Servant of the Underworld, is the first of her Acatl novels. For some reason I had the impression these were straight-up mysteries set in the Aztec capital of Tenochtitlan. There’s definitely a strong mystery element; her protagonist, Acatl, would certainly find much in common with Benny Cooperman, Philip Marlowe, and Hercule Poirot. The main difference would be that none of those famous detectives ever had to deal with a living god. For Acatl, High Priest of Mictlantecuhtli, dealing with the gods is a daily reality.

A mysterious summons draws Acatl, priest to the god of the dead, out of his own temple and into the House of Tears, a school for girls. There he learns that the priestess Eleuia has been abducted. Her room is splashed with enough blood to cast her survival into doubt. Not only that … it is clear that she has been carried off by some occult means.

Another thing is clear; the list of possible suspects is very short and the man at the top of that short list is Acatl’s own older brother, the warrior Neutemoc.


Neutemoc has a long history with the missing woman, one that does not bear close examination. The authorities want the situation resolved sooner than later and don’t seem to care a great deal whether or not Neutemoc actually committed the crime. They want him charged, executed, and the matter settled.

Acatl wants to find out what actually happened. He is motivated less by a belief that his brother is innocent than by a desperate hope that Neutemoc is innocent (His sister Mihmatini shares his hope and plays a significant role in the investigation and its aftermath.) That hope seems to be rewarded when Acatl realizes the guilty party has pulled off a rather cunning magical sleight of hand, one that successfully — almost successfully — hid the true nature of the magic used to attack Eleuia.

As Acatl soon discovers, the truth does not guarantee a happy resolution. What seemed to be an act of personal spite is actually part of a larger problem. Acatl expected to have to wrestle with intractable human emotions: jealousy, malice; and personal ambition. Instead he is dealing with gods at variance. What’s at stake isn’t just the fate of one warrior, but the fate of the Fifth World itself.

De Bodard’s prose has always been solid, even pleasant. However, I did not exactly enjoy the other De Bodard work I read, which, like so much SFF, was set in an autocratic state. Autocracies (dictatorships, monarchies, empires) seem to be the SFF default. It is not so much that I object to any particular one of these states, but the endless parade of them is wearing. Oddly enough, the top-down Aztec state in this work does not raise my hackles … and I am not entirely certain why. It could be because I find the Central American cultures fascinating, It could also be because Tenochtitlan has so many factions, human and otherwise, that it doesn’t have the feel of a modern autocratic state.

It’s a challenge to present an Aztec setting sympathetically, given their practice of blood sacrifice [1]. De Bodard does a pretty good job of putting Aztec practices in theological context, explaining why the Aztecs did what they did. Acatl lives in a world where the connection the priests see between sacrifice and the behavior of the gods is not only reasonable, but observable.

I am not nearly as familiar with the minutiae of Aztec life as I could be, but I do wonder if a man who hates politics as much as Acatl does should have become a priest. It seems to me that there’s an inherent political aspect to all religious hierarchies. Maybe he should have been a fisherman like his father.

The Aztec worldview isn’t exactly a comforting one, so I suppose it is thematically appropriate that Acatl’s investigation goes from bad (brother accused of horrific crime) to worse (someone he loves will be hunted by Wind of Knives). And those aren’t close to the most unsettling discoveries he makes in this novel.

I should perhaps add that this is not a doorstop; it is a fairly short novel, about 328 pages in the edition I read. It moves fast; the author segues from ​“unjust accusation!” to ​“existential threat!” in admirably short time.

The series begins on an epic scale; where does De Bodard go on from endangering the whole world? Unfortunately, I probably won’t get back to this series for some time so I won’t find out how De Bodard answers that question. You don’t have to wait to find out, though: Servant of the Underworld, and two sequels, Harbinger of the Storm and Master of the House of Darts, are available as the omnibus Obsidian and Blood from Angry Robot. 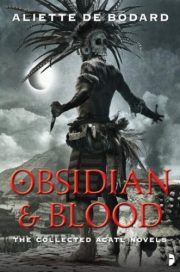 1: When I was growing up, the Aztecs were dismissed as a barbaric culture much given to human sacrifice and needless cruelty. That is true; however, Charles C. Mann’s interesting non-fiction book, 1491, makes a strong case that contemporary European cultures killed people on religious grounds more frequently than did the Aztecs.