At twenty, Amir Halgal is considered very nearly a spinster by her nomadic tribe. When the chance to marry her off presented itself, Amir’s family didn’t look too closely at the deal, or at her spouse.

Which is how twenty-year-old Amir found herself in an unfamiliar town on the Silk Road, married to twelve-year-old Karluk.

Amir finds herself not just in a new and unfamiliar family, but in a community whose culture is unfamiliar as well. Her new kin are kind; instead of being mocked or berated when she stumbles over cultural differences, Amir is offered the chance to learn how things are done in her new home.

In return, she is quite willing to share the arts lost to the villagers, but kept alive amongst Amir’s tribe. She may be at a loss in town, but she is adept with a bow. When she and her husband set out to locate some wandering traders, it’s the experienced hunter and horsewoman Amir who takes the lead.

But Amir’s birth family have discovered a better use for Amir than the one to which they initially put her, Even as Amir and her husband search for the traders, her former family is scheming to take her back.

Because the story is mostly set among Karluk’s people, we don’t get to see much of Amir’s birth family. The tribespeople we do see from her family are the men; whatever the role of women in her society, it does not include diplomatic outreach1. With one possible exception, Amir is the only woman of her people we meet. The men don’t give the impression of valuing women much beyond their utility as trading pieces; their reaction to the death of a traded bride is peevishness, not sorrow.

The exception is Balkirsh, the townie matriarch who deals with the nomads demanding Amir’s return. She is indefatigable, disinclined to simply accede to the men’s demands, and not a bad shot with a bow herself. It’s the bow and the old woman’s skill with it that suggests the common origin for her and Amir.

I am not really sure what the back-story to the marriage was from Karluk’s side. Amir’s people seem mostly to have wanted to rid themselves of an older, unmarried woman … did they carefully conceal her age or did the people negotiating for Karluk just assume Amir would be younger than she was?

Note re art: I sometimes found it hard to distinguish between the faces of the younger characters. That’s not an issue with the inanimate objects in this story — there’s a whole chapter whose motivation seems to be ​“Kaoru Mori would now like to draw intricate pictures of carved wood” — which only makes the lack of variation among people that much more baffling.

Still, the illustrations are 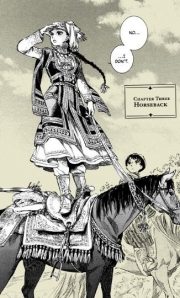 the story is interesting, and I intend to read further volumes as they fall into my hands.

A Bride’s Story is available from Yen Press.

1: The treatment of women by Amir’s male relatives makes me wonder how it is that Amir is an expert horsewoman, hunter, and archer. The explanation may lie in the fact that the elder who led the tribe had died not long ago; perhaps what we’re seeing isn’t the traditional behaviour of her people, but the new elite being particularly dickish.