Welcome to the thirteenth review of Hitoshi Ashinano’s Yokohama Kaidashi Kikō. How happy I am to have read thirteen volumes of this manga! And how sad, because that means after this one there is only one left.

All Ojisan has to do to win tethercat immortality is to last one more issue. Is that so much to ask?

At the End of Summer

Matsuki finally settles the question of whether or not she will be Ayase’s apprentice.

There is also a sidebar on the inevitability of change: wilderness has completely eaten Ayase’s childhood home.

A recurring theme in this volume is that gasoline is harder to come by than it used to be. Whether this is a regional issue or a global one is not clear. Nor is it clear if this means that the old infrastructure is decaying or if it is just that a new one is evolving … or both. More on that later.

The Wind on My Face

Once again Alpha enjoys the sensation of flying and once again it is not clear if she is hallucinating or if she is experiencing something real.

Matsuki is astounded by something utterly unexpected at the cafe: a customer!

Aw, Kokone and Alpha are so cute together! Matsuki cannot bear the cuteness.…

Kokone and Alpha watch a meteor shower together. Matsuki, too shy to join them, watches from her home.…

The Star the Eye Alights On

Ayase ponders the mysterious human-technology-mimicking plants that have sprung up in the odd world of YKK. Meanwhile, humans and their artifacts are vanishing and the coastline is moving closer and closer to Alpha’s cafe.

Kokone has the mechanical motor of her scooter replaced with a bio-mechanical engine. The rider’s experience is very different.

This is what makes me think one reason gasoline is growing scarce is that technological change (not just declining population) is reducing demand for fuel. This may or may not be related to the rate at which ocean levels are rising…

Kokone’s reaction to turning on the scooter could be interpreted in a number of ways. 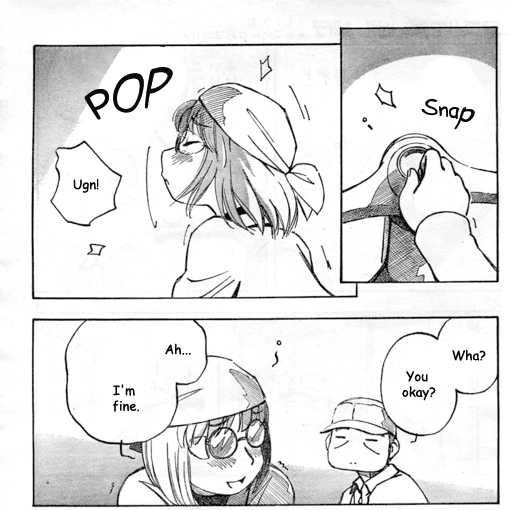 This happens every time she starts a scooter.…

Shared moonrise reveals to Alpha that she literally does not see things the way Ojisan does.

Ojisan is old and I can assure you that even by early middle age, human eyesight declines. This may also be another hint that robots are better than humans at many things.

A grown up Matsuki drops by the cafe to tell Alpha how her new life is going.

I am not sure how long the time jump between stories is. Months, at least.

One Who See, Walks, and is Delighted

Alpha loans Sensei her weedwacker, which seems to be an excuse to share gossip. Like Ojisan, Sensei insists on giving Alpha a very significant keepsake.

Ojisan has been automated out of a job, so he has turned his hand to obsessive gardening. Note that the series established way back in the first volume (I think it was) that even then, Ojisan’s ability to supply produce vastly outstripped the demand for it. And the population has only declined since that volume.

The Group at the Ocean

Kokone, Matsuki, Alpha, and Maruko enjoy a day at the beach; Maruko supplies the snark, but also seems to be enjoying herself.

Taapon returns to the Northern Hemisphere. On board, room monitor Alpha ponders the significance of what she sees below the eternally airborn vessel.

If only there was some means of communicating with people on the ground, perhaps one named in the title of this chapter.…

Taapon’s re-appearance means that six years have passed since we last saw it. Tick tock.…

I am not entirely sure how much time has passed since issue one, but it feels as if it has been at least a decade. I thought Matsuki and Takahiro would be married by now.…

One volume left. I savor a gentle, beautiful sadness.