The fifth volume of Hitoshi Ashinano’s Kabu no Isaki was published in 2012.

In volume four, Isaki, Kajika, and Sayori braved the Tate Road to get a better look at Mount Fuji. Having arrived at their destination, they discovered that proximity does not guarantee a good view of the thirty-eight-kilometre-tall mountain. What next?

Woken by a strange noise, Isaki is delighted to discover a Lockheed C130 Hercules (or as he and his friends have nicknamed the plane, a ​“Blacknose”) has landed at the isolated airstrip. Even better, the plane will be giving Isaki and his friends a ride to Subashiri. Kajika joins in Isaki’s enthusiasm, while poor Sayori just wants to sleep.

To give some idea of the scale of the plane, Isaki’s cub can carry about 200 kg of payload; the Hercules can shift about 20 tonnes. This particular Hercules has been upgraded, although not in ways that are readily apparent.

One of the Hercules’ more noteworthy features is the absence of a conventional cockpit. 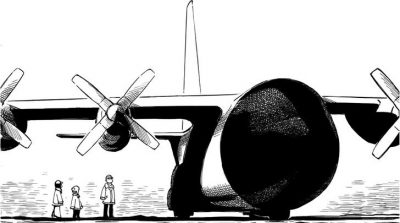 This is because the plane is under the control of an on-board artificial intelligence, an enhanced autopilot.

I guess it wouldn’t be an Ashinano without robots of some sort.

The autopilot isn’t just friendly, it is chatty. It’s not particular great at avoiding turbulence.

Kajika is greatly amused by the plane’s choice of personal pronoun, ​“boku,” which is the term a young boy would use to refer to himself. The plane claims no gender, but all the options it considered for personal pronouns were male. Is it surprising that a Japan of the future (or alternate reality) has not introduced a special pronoun for AIs? Serious question.

Once again, proximity to Mt Fuji has not improved the view. Subashiri is entirely within the mountain. At this height, humans could not survive outside. Moreover, the facility is not designed with tourists in mind. Still, there’s hope, because a cable car runs up to an even loftier elevation.

The cable car is fairly spartan, which gives Isaki the chance to muse on the fact that the package he is delivering is Shiro’s mysterious package, which he has already delivered several times during this trip.

Isaki has some idea what’s in the package, but no idea why he keeps having to deliver it. This fits nicely with the way we don’t really find out why someone would have built a series of facilities way up the slope of Mt. Fuji.

The autopilot can join their journey, in that it can use a remote device carried by the travellers as a combination camera, mic, and speaker. The humans don’t see this as talking to someone via phone, but rather as the autopilot temporarily inhabiting the device. I found this odd.

Shori enjoys a nice, quiet day to herself.

In theory, Shori runs a store. In practice, she doesn’t let that interfere with doing whatever comes into her mind to do. What a pleasant life that must be. Although I do wonder how it is that she stays solvent.

Our travellers arrive at the last station, which is thirty kilometres and more above sea level. Once again, the friendly staff regretfully inform our heroes that the facility wasn’t designed with visitors in mind. Still, the view cannot be beat. 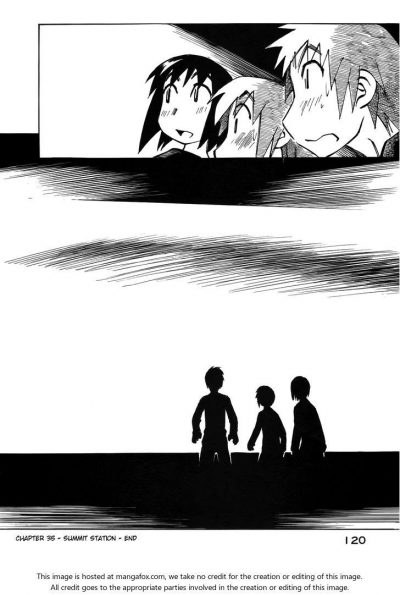 Having finally arrived at the destination he has so long sought, Isaki is called away to carry out one final minor formality concerning that odd little package.

Time of the Cub

From Isaki’s perspective, the task takes about twenty minutes. From his friends’ perspective, a couple of seconds. The discrepancy is never explained. Neither is the peculiar flood of memories Isaki experiences in mid-errand

It seems clear the memories were somehow artificially triggered but the how and why of the experience are, of course, not explained at all. The attendant is friendly but rather coy about what’s going on.

Before the Holidays Start

Having reprised his grand journey in reverse, Isaki is left with his memories of the grand adventure.

As one expects from Ashinano’s work, there’s almost no plot. One does encounter lots of beautiful scenery, as well as more allusions, questions, and unhelpful hints than explanations. Readers are advised to take a hint from Isaki and simply enjoy the journey without worrying too much about exactly what is going on or where the trip is taking them.

There is no authorized English edition of this work.