It has taken me four months, but I have finally arrived at the 14 th (final) volume in Hitoshi Ashinano’s Yokohama Kaidashi Kikō. Like the golden age of humans, the series has come to an end.

A customer visits the cafe; because the scene is told literally from their point of view, we never see who the customer might be. We do learn that ten years have passed. Much has changed in Alpha’s neighbourhood in ten years; Alpha herself has not.

Ojisan is conspicuously absent from this volume. His garage is an abandoned ruin. 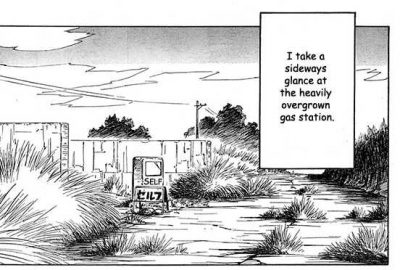 Having lunch with an officemate is a welcome part of Kokone’s routine. But now her officemate is being promoted! What will become of their friendship?

A dragon lives forever but not so little boys
Painted wings and giant rings make way for other toys
One grey night it happened, Jackie Paper came no more
And Puff that mighty dragon, he ceased his fearless roar

I suppose androids have a choice: they can avoid the short-lived humans, because caring for them is just too painful, OR, they can accept that this is the nature of their world . In this case, Kokone can ignore the inevitable end of her friendship, because her pal is only moving to a different desk.

Matsuki writes Alpha to tell her that she is doing OK in her new life in the Big City. She just happens to be near that jerk Takahiro. It does not seem as if Matsuki will be coming back to the cafe … but that does not mean there won’t be a visit

Takahiro makes some bold choices in this story that A) won’t stop the relationship-bound Matsuki juggernaut and B) will give the couple much to discuss in the decades to come. Go him! He won’t regret his decisions at all.

One Who Wakes Up

In the manner of her mayfly kind, Matsuki has prepared for her inevitable demise by gestating a replacement, Sae-chan. The young Sae-chan encounters the ageless Misago.

The best kind of immortality is the sort where you don’t die. I suppose imperfect copies are better than nothing.

Alpha enjoys a stroll through her increasingly re-wilded neighbourhood.

At some point, Alpha grew confident enough of her fast reflexes and the durability of her camera that she has begun to take aerial selfies by flinging the camera high into the air. This seems … unwise. No matter how perfect her reflexes, eventually something will go wrong. If you are immortal, there’s lots and lots of time for things to go wrong.

Alpha recapitulates the first story with another shopping trip to Yokohama. The roads are more decayed, the towns more overgrown, the humans less numerous, but Alpha continues, seemingly unchanging, in a changing world.

The era in which YKK is set is called ​“The Era of the Calm Evening.” It will be followed by ​“The Night of Humanity”. That’s a phrase that would ordinarily inspire at least a little dread. Not in this series. 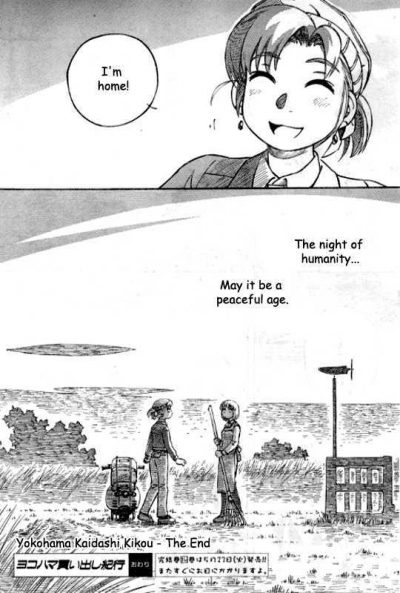 Humans will vanish but thanks to their creations, their memories will linger.

An unidentified traveller — Sae? — uses a remarkable method to overcome a natural barrier.

And that, aside from one or two items I may be able to track down in English, is it for YKK. Just off-hand, I cannot think of a work whose approach to human extinction is quite as gentle as this one is. There’s no rage that our time is drawing to a close, nor any sense of bitter satisfaction that we got what was coming to us. The androids are not smug; they do not gloat that they will endure while humans pass away.