Galactic Derelict and 1964’s Night of Masks were my two iconic Norton novels, the ones that shaped how I saw her fiction, the books to which I returned over and over. I owned the mass market paperback with this cover 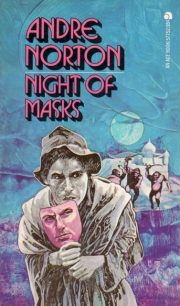 The Dipple on Korwar has become no nicer since we last saw it in Judgment on Janus. This novel’s protagonist, Nik Kolherne, has a harder row to hoe than Janus​’s Naill or Catseye​’s Horan. Not only is young Nik an orphan with no prospects, not only is he trapped in an urban hellhole — he is disfigured. A war-time injury transformed half his face into a horrific mask, a jumble of scars and keloids.

The authorities made a perfunctory attempt to repair the damage. When Nik’s immune system rejected the standard, cheapest, option, they consigned him to a life as a freak, in a world that despises the weak and loathes reminders of the war.

Chance places Nik at the right time and place to overhear two Guild criminals conspiring. Bad luck lets him get caught eavesdropping. The only thing that saves Nik from being the protagonist of a tragic short story is a keen-eyed crook named Leeds. Leeds is sharp enough to figure that Nik could be useful in his latest criminal scheme. The crook is also superstitious enough to suspect there could be some cosmic significance to Nik’s fortuitous appearance.

The Guild can offer Nik cosmetic surgery of a quality far beyond anything available to an outcast living in a slum. All they ask in return is that Nik use his new face, that of a bold adventurer named Hacon, to convince a naïve, isolated young boy named Vandy Naudhin i’Akrama to leave his high security home. (Vandy’s warlord father has stashed Vandy there for safety.) Hacon is one of the few people Vandy trusts implicitly and one of very few who might convince the boy to reveal certain secrets without triggering the mental defenses placed on the boy’s mind by his father.

Hacon is not just a bold adventurer; he is entirely fictional, the product of a bored and lonely little boy’s fantasies. Nik does have some qualms about deceiving a trusting boy, but assures himself that it is too late to back out. Crossing the Guild is likely to be fatal. Besides, Leeds has assured him that the Guild only wants to abduct Vandy, not murder him. If you cannot trust the word of a charming career criminal, who can you trust? It doesn’t hurt that Nik desperately wants to believe Leeds; not only is the crook offering him a way out of the hellish Dipple, but he is offering a new face as well.

The abduction part of the plan works flawlessly; transporting Vandy to the distant, obscure world Dis is trivial as well. The complications begin when Nik discovers that Leeds is nowhere to be seen, leaving Nik and Vandy at the mercy of a capricious drug addict. Staying at the Guild base risks death at the hands of a violent criminal, but leaving the base … well, that’s almost as dangerous.

Circling an infrared sun, scoured by a deadly stellar flare [2], Dis is a world of eternal darkness, sudden deadly storms, and terrible, ravenous life. Without special goggles, humans are blind even at noon on Dis. This is not a problem faced by any of the local predators, of whom there are many. Nik and Vandy are poorly armed, have but one pair of goggles between them, and have only a vague idea as to where safety might be found.

The abundant ruins left by the unfortunate race that once called Dis home offer a refuge of sorts. What Nik and Vandy don’t know is that the ancient race was only mostly wiped out by the calamity that scoured Dis, and the remaining natives don’t take kindly to interlopers.

At the risk of angering other Norton fans, I don’t generally think of Norton as someone whose settings were particularly memorable. She set her stories on jungle worlds and desert worlds and atomic-war-sure-was-a-bad-idea-for-the-USA worlds, but in general her planets were backgrounds to the story. Night of Masks’ Dis is different; it’s one of the main antagonists Nik and Vandy face. When I first read this as a twelve or thirteen-year-old, the idea of being trapped on a lightless world filled with hungry and weird predators was very effectively atmospheric [3].

The worldbuilding for Dis was in part thanks to the contribution of one Charles F. Kelly, whose name turns up in the forewords of a couple of other Nortons, I believe. I have a nagging feeling that I should know the name, but I cannot quite place it. No, Googling does not help.

To be honest, I am not sure that the ecosystem of a hot, wet, life bearing world under a sun most of whose output is infrared would work the way Norton has it working. Dis is effective nevertheless.

Leeds is an uncommonly effective antagonist, an aspect of the book that I didn’t properly appreciate as a kid. He’s always charming, polite, and friendly. He’s also willing to say whatever it takes to get whoever he is talking to do their bit for his schemes. He’s insightful enough to know which lies to tell and when. He conceals from Nik that the Big Plan may involve a shallow grave for Vandy, because he knows that Nik, being mostly a good kid, wouldn’t have cooperated without the lie.

Leeds’ true nature becomes clearer after he belatedly arrives on Dis and finds that his plan has fallen apart. Knowing that Nik has no access to mirrors, Leeds plays on Nik’s fear that the cosmetic surgery will prove as temporary as previous attempts to repair his face. He uses that fear to get Nik to play a new role in Leeds’ brand-new scheme. Leeds is a cunning monster, but always a charming one.

Re-reading this, I found the ending a little abrupt, but I still fell under the spell of the book again. This remains one of my favourite Nortons. It is available from a number of sources, including AbeBooks, BookFinder, and your local library.

1: The book didn’t fall apart due to sub-par binding. Most of my Ace MMPBs have withstood decades of wear. This one really did get read to bits.

Now, don’t get me started on Lancer’s bindings.…

2: I would like to acknowledge at this juncture the lengthy discussion during editing about whether the phrase I want is ​“solar flare” or ​“stellar flare”. I use ​“solar” to refer only to our Sun and since the flare in question came from another star, I went with ​“stellar”. Feel free to weigh in on either side of this debate.

3: To make it worse, one of Nik’s weapons is, as far as he knows, a theatrical prop that makes pretty light but doesn’t do much else.