I freely admit that this review of 1964’s Deadly Litter is a placeholder review. It buys me time until I can toddle over to Dana Porter Arts Library’s Rare Books room, where I hope to read and review their copy of Escape Orbit. I own a lot of White books but not, as it happens, that one. Deadly Litter won out over all of the other James White novels that I could have reread because I could not remember reading it at any point since the 1970s. Also, it was at the top of my stack of James White novels and if I picked any other book, the stack would have fallen over.

I have to say, that method handed me a better book than have many of my more intellectual approaches.

James White was born in Belfast and he took a very dim view of violence, preferring to look for other sources of drama for his fiction. His Sector General stories, probably his most famous works, are medical dramas. IN SPACE!

This collection illustrates Hal Clement’s claim that ​“the universe is antagonist enough.” In all of the included novellas and novelettes, the plot is shaped by the various deleterious effects of space travel on humans, effects that must be prevented if space travel is to happen at all. Aside from the notion that space travel is likely to be very hard, the stories do not otherwise appear to share a common background.

Radiation! Not our pal! Worse, steps to mitigate lesser forms of radiation only allows powerful cosmic rays to blast apart the nuclei of the atoms of the shielding material, producing horribly mutagenic secondary radiation. The solution is two-fold:

Riding herd on a bunch of comparative youngsters is hard enough but as Captain Woodhill finds out, it becomes even more challenging when his ship stumbles into an unexpected First Contact with aliens whose curiosity about the humans is in no way informed by any sense of grapeliner fragility.

I think grapeliners, which have extended and highly compartmentalized structures, also turn up in White’s Lifeboat.

White manages to find time in his novelette for a subplot about a very nasty trick Ship’s medic Sister Gallagher and Woodhill play on a female passenger. The woman’s propensity for scantily-clad sunbathing in her transparent passenger globe offends the elderly matron’s sensibilities. The corrective is a jape that involves deliberately setting the young woman up for a serious sunburn.

It is not clear to me how grapeliners weather solar storms.…

Aware that the odds of a ship surviving a deep space transit are greatly improved if the crew see their captain as an exceptionally capable man, the British space service has taken the bold step of supplying Her Majesty’s Space Vessel Mizar with a particularly outstanding captain who is also particularly aloof. That is because he is a fiction maintained by the ship’s medical officer, Surgenor.

Earth’s fragile peace has been purchased by a perpetual state of nuclear tension. Each nuclear-armed nation anxiously watches the others for any sign of an attack. This state of affairs extends into orbit and beyond. It is with a growing sense of alarm that Surgenor slowly realizes that despite the service’s stringent vetting of spacemen, the Mizar appears to be crewed almost exclusively by traitors. The voyage may have begun as a test of a daring new psychological measure, but it seems it will end with treason, as the Mizar is handed over to the hated Russians on Mars.

This was written very early in the Space Age and it is clear that customs concerning overflights have evolved very differently than in our history. Before Mizar breaks orbit for Mars, it radios down to China to assure the people down there that Mizar is not ​“contemplating dropping an atomic bomb” on them. Because nothing is as reassuring as someone feeling that they need to say whether or not they are considering an act of war at this time. As it turns out, this isn’t zeerust but a significant part of the world-building.

Interesting that a 1959 SF story not only treats China as a Power but also, in a very few words, establishes the Chinese as just folk, not some shadowy Asian menace. This novella, along with Grapeliner and The Lights Outside the Windows1, was first published in the magazine New Worlds, then edited by John Carnell.

The Lights Outside the Windows (1957), novelette

The mere sight of naked space confronts any unlucky spaceman with the terrible truth of man’s insignificant place in a vast and indifferent universe. No man can ever serve on a space vessel without being at risk of having his vulnerable psyche shattered by a single careless glance out a porthole2.

The people running Star Lines, the lone private space carrier in a field dominated by government-subsidized concerns, have a secret method that deals with the insurmountable opportunity presented by space travel. Star Lines competitors are desperate to learn this method. And yet, the secret is isn’t a secret at all. No man can survive the sight of space. Women, on the other hand.…

White seems from all reports to have been a very pleasant fellow but he did have one huge blind spot, which is that he was as sexist as a giant ball of sexists wrapped in a dense layer of yet more sexists. Any woman is immune to space rapture because:

after the nature of her kind, she possessed a very practical, down-to-Earth mind. Absence from hat same earth did not bother her either because — to over-simplify an extremely complicated subject — she was conscious of carrying her world inside her.

Having established that women’s minds are better suited to working in space than men’s, he can only imagine women working in space in traditional roles. The female spacer in this does not operate the craft: she is the mother-figure to a crew of men who have been conditioned into a child-like and hence controllable mental state. GOD DAMN IT, WHITE. I AM WAVING MY SHOUTING CANE3 AT YOU! 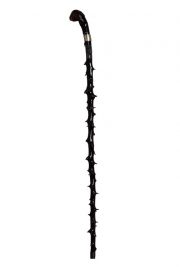 You would think that, like Earth’s ocean and Earth’s atmosphere, space is far too large to pollute but after one hundred and fifty years of serious effort, humans have proven themselves up to the task. Faced with the reality that even a single discarded tea leaf could fall through space for years to cross some unfortunate spacecraft’s path at sufficient relative speed to blast a hole in the hull, the authorities have been forced to adopt draconian rules about space-litter.

The one positive note in the danger presented by space-litter is that once a catastrophe has occurred, Newtonian physics and some knowledge of the path of debris will point a finger at the culprit. So it is that eleven years after a mishap aboard the spacecraft Sunflower forced him to retire from space-service, the ship’s former engineer, Caulfield, is detained by two Police Survey Ship officers demanding to know what exactly happened that day on the Sunflower and what exactly the damaged ship cast off to reduce payload.

The Sunflower debris has already killed one ship and its crew; many more may die if the evolving dimensions and path of the cloud of debris are not properly characterized. Success depends on Caulfield sharing what he knows about the accident. Unfortunately, full disclosure would reveal Caulfield’s most closely held secret and he is determined to avoid that.

The ships in this novella seem to be adopting orbits that are fast enough to travel from planet to planet fairly quickly but not so fast that cast-off debris sails out into interstellar space. I am a little skeptical that even if we grant that this era has a lot of space travel and has had it for a long time, clouds of debris orbiting through the space lanes would be such a problem.

Yeah, yeah, Planetes. But they deal with trash orbiting Earth and that’s a much, much smaller volume than the Solar System.

While Tor has done a good job of keeping the Sector General stories in print, collections like this are many years out of print, An ISFDB search reveals no edition of the Deadly Litter collection more recent than the 1981 Del Rey printing. Pity. While I will admit these stories are of their time, a time before interplanetary probes and crewed spaceflight, White plays as fair as he can with the information available at the time. He gets points from me for going to the trouble to think up a different potentially insurmountable problem for crewed spaceflight in each of these stories, rather than reusing the same challenge over and over.

Although … all of them at once could have been amusing.…

1: I am compelled to round out the set by explaining that The Lights Outside the Windows was published in Science Fiction Adventures, also edited by Carnell.

2: No, I don’t know why, if the sight of space is so deadly, ships are built so that the crew can look outside while the ship is in flight.

3: Of course I have a shouting cane. Why don’t you have one?