Volume 11 of Hitoshi Ashinano’s Yokohama Kaidashi Kikō is much like the previous ten volumes: quiet moments, mysteries, and not much in the way of answers.

Well, one answer: Ojisan is still among the living, at least for now.

Maruko drops by for a cup of coffee at Alpha’s newly refurbished cafe. This visit gives Maruko an opportunity for constructive criticism. It also makes explicit the source of Maruko’s grudge.

Wow, Maruko is steadfastly unpleasant. Understandable, given the source of the friction, but … Maruko would do better to be polite and agreeable. At least until there are no witnesses.

Failing that, jumping up and down while yelling ​“KOKONE IS MY GIRLFRIEND! MY GIRLFRIEND, NOT YOURS,” would be a bit more subtle than what Maruko actually does. Here, Maruko, have some music to listen to while you fume.

Dissatisfied with the quality of her cafe’s water, Alpha searches for pure spring water. When her quest fails, Alpha looks to other sources.

I am sure that if Maruko had accompanied Alpha, she would have pointed out that even though Alpha says she is trying to be more practical, she set out to acquire tea water armed only with two small bottles.

There’s a rather sinister human-shaped fungus in this episode. Perhaps it eats unwary travelers.

Alpha seizes the chance to get one last glimpse of Taapon before it leaves for a six-year tour of the southern hemisphere.

“It is said that there are still people trapped on board.”

Trapped? Room Monitor Alpha does not act as though she is a prisoner. The people down on the ground are indeed poorly informed about what is happening on Taapon, just as the crew of Taapon know little about the people down on the ground. And just as the readers have no idea how things ended up like this. Although whatever happened didn’t block radio, because Alpha is alerted to Taapon’s passing by a radio broadcast. So why the lack of communication?

Alpha is overwhelmed by the complexity of tastes in super-black sugar.

This must be black sugar but better.

Ayase visits the remains of an abandoned town, now overrun by the weird mushroom thingies.

Which don’t swarm and eat him. Yet. Probably waiting for him to let his guard down.

There are also some very large (skyscraper-sized) cubical mushrooms. It is not clear to me why they don’t collapse under their own weight … or why the person who presumably engineered them thought they would be a good idea. Perhaps the humans are leaving behind mementos, so that thousands of years from now, there will still be things that look like human buildings.

Confronted with an unexpected visit from Maruko, Alpha does her best to be a good host.

You know, I bet Twilight Japan has all kinds of places in which Alpha could stash Maruko’s remains without anyone being the wiser. And there’s a literal Chekhov’s Gun somewhere in the cafe.…

Takahiro surprises Alpha with news at once happy and sad.

I bet Japanese would have a word for stuff that is happy and sad at the same time. One way to look at this is Takahiro growing up. Another way is that the mayfly human is one step closer to the grave.

[Editor’s note: I am reminded of Issa​’s haiku

Is a dewdrop world

Takahiro and Matsuki spend the day at the beach. This may be the last day at that beach that they can share.… 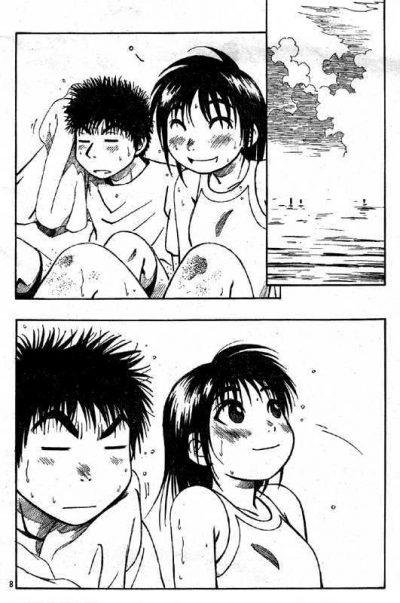 Takahiro tries manfully to avoid having a moment with Matsuki, but relents in the end. Which is good, because I thought reacting to ​“let’s go to the place that was special to us as kids” by mocking the other person for being a kid was a dick move.

For a robot, Alpha is a terrible mechanic. Worse than Canada’s Worst Handyman . 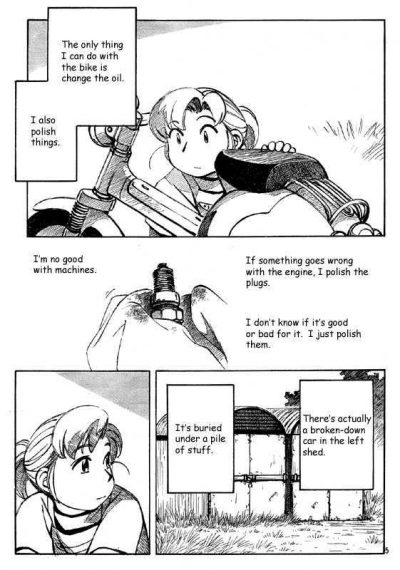 I don’t know why I expect robots to have practical skills, but I do.

Ojisan is still alive! Doomed as all living things are in this world, but alive for the moment.

Kokone wanders through what was once a major city.

Nature sure is hungry.

I sometimes claim YKK is a comic where nothing happens, very slowly … but actually there is inexorable change as the years roll by. Kids grow up, buildings collapse and some are repaired, robots go about their sometimes mysterious lives. If this were an ongoing series rather than ending in a few volumes, I expect the world around Alpha would eventually look very very different than it did in the first volume.

Sadly, there are still no legal, sanctioned translations of this work available for purchase in North America.