1976’s The Storm Lord is the first volume in Tanith Lee’s The Wars of Vis trilogy. It establishes the setting: oppressed Lowlanders who face endless racial persecution at the hands of the violent and sexually voracious Vis majority.

Dragged away from her people to sate King Rehdon’s lusts, priestess Ashne’e leaves her mark on history in two ways; first, her deadly Lowland sex magic leaves Rhedon a corpse the first time he rapes her. Second, that single night is enough to leave Ashne’e pregnant with Rhedon’s youngest son, a boy who by the laws of the great city of Dorthar is entitled to its throne!

If he can stay alive long enough to claim his rightful place.

Warning: by the standards of the 1970s, which were kind of rapey, this is super-duper rapey.

Ashne’e barely lives long enough to send her infant son Raldnor to safety with a trusted ally. The ally herself perishes in mid-journey. That is a big hint that there’s a pattern where the women in Raldnor’s life are concerned: get involved with this guy, in any way, and you’re DEAD (or drugged into a near death state so you can be posed artistically). Raldnor in contrast returns from the dead twice.

Although his mixed race is plain to see, Raldnor has no idea that he is the rightful King of Dorthar. In fact, given that Ashne’e’s son was reportedly murdered on the orders of the Queen, and given that everyone who knew different is dead, it does not seem very likely that Raldnor will ever learn that HE is the long-lost rightful heir.

Fate (or perhaps the snake goddess Anakire) has a way of sending heroes in the right direction. Outrageous coincidence ensures that Raldnor becomes one of King Amrek’s trusted associates (King Amrek being his half-brother and the unrightful heir). Raldnor’s good looks and his inability to resist feminine charms (even if the lady is the King’s concubine) ensure that Raldnor does not long remain in the King’s retinue. In fact, once the royal family learn just who Raldnor has been boffing, they order his death … again.

Reported dead a second time, Raldnor escapes Aa second time. Once again, the royal family are certain that they have succeeded in murdering the interloper. Instead, they have sent Raldnor on a journey that will take him across the known world before he returns to Dorthar — this time at the head of an army of disgruntled Lowlanders.

Wow, this is super, super rapey. And Raldnor would need industrial-grade refrigerators to store all the women who die or suffer fates worse than death in order to motivate his rebellion.

This book is an example of a trope that N. K. Jemisin calls discrimflip or a discrimination reversal. Oppressor and oppressed in our world are reversed in the world of the novel. Real life oppressors are oppressed, and victims become the bullies. You’d think that something this obvious would be easy to do well, but judging by the long history of this trope, discrimflip is all too easy to fumble.

I’m not sure that I am to the point of exclaiming ​“Oh Tanith Lee No”, but I can see it from here. I am sure that her plot, in which sexually predatory black Vis prey on the helpless white women of the Lowlanders, is all too reminiscent of the widespread white anxieties about nasty black people that were alive and well when this book was published, in the 1970s. (Not to say that they’re safely banished now.) This book is not as unfortunate as, oh, Farnham’s Freehold. The Vis are not eating anyone. The Lowlanders, with their lethal crotch magic, are just as exoticized as the Vis. Still, this was not at what I expected to be reading when I started this series of Tanith Lee reviews. Of course, there’s precedent. Long-time readers will remember my horror at encountering Ralestone Luck for my Norton review series.

Everyone in this book is subject to passions beyond rational control. None of the societies depicted have much use for the notion of sexual consent. As a result, there’s an awful lot of sex in this novel, and much of it takes the form of powerful people abusing powerless people and disposing of them afterward. Not without historical precedent, but very much not my thing.

Someone on Goodreads remarked that this was ​“like Anais Nin ghosting Robert E. Howard.” That’s a pretty fair assessment; I wish I’d thought of it. The men in this book are mighty and lusty, the women are most of them either conniving bitches or victims. The plot meanders and the prose is even lusher than one might expect from pulp fantasy. The book is energetic, I’ll give it that, but it is not exactly coherent1. Read this if you are a Lee completist. If you aren’t, then only consider this if you enjoy super-duper rapey sword and sorcery with meandering plots and purple prose.

This is my sad face.

There is an SF Gateway edition of The Storm Lord , one with a considerably blander cover than graces my copy. 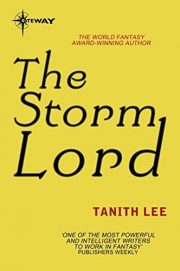 I am unaware of an American edition.

1: One almost gets the sense that Lee was using random encounter tables for some of her plot.