I am very annoyed at the people who have been selecting my reading material for the last 13 years for not having ever sent me a Max Gladstone book and with Gladstone for not having more books in print now that I have discovered them.

Decades ago, the Gods declared war on the human Craftsmen and Craftswomen. The Gods lost, decisively. The Great Powers are for the most part the nations run by and for the interests of the Craftsfolk; this has certain implications0 that are developed over the series.

When we meet Tara Abernathy, an academic dispute led to her being cast out of the Hidden Schools, the institutions where would-be magical adepts like Tara learn the Craft. The Hidden Schools float far above Tara’s world and it is a long, long fall to the ground.

I can see no biblical parallels in Tara’s exit from school.

After discovering that contrary to Thomas Wolf you can go home again as long as you don’t mind being the target for an angry, torch-and-pitchfork-waving mob, Tara accepts a junior position with the necromantic firm of Kelethres, Albrecht and Ao. As a new hire she should by rights expect a series of tedious, unrewarding tasks but instead her boss Elayne Kevarian brings Tara along with her on an intriguing case; resurrect the dead god Kos, the deity whose divine will powers the great city Alt Couloumb, one of the few devout cities to survive the Gods War with its faith intact.

While bringing a God back to life is itself challenging, the larger part of the job is hammering out the legal conditions under which dead Kos will be brought back to life. When Kos’ lover Seril was slain by the King in Red, what was created out of her ashes was not Seril but Justice, powerful but merely a hollow revenant of the dead Goddess. Kos’ acolytes would very much like Kos to avoid that fate; Tara’s former mentor Alexander Denovo, advocate for Kos’ creditors, has entirely different plans for Kos.

Kos is not merely a dead God; the God is a slain God and his murder seems connected to the bloody murder of Judge Cabot. Assisted by Abelard, the chain-smoking Novice Technician who would have been the witness to his god’s moment of demise had he been paying attention at just the right moment, Tara and Ms. Kevarian have to unravel who killed Kos, how they killed him and more importantly why they killed him, then prove their case in a court of law.

I never wonder ​“why are these people apparently speaking English?” What distracts me is pretty arbitrary.

Oddly, this felt more British than American to me and I have no concrete idea why. It could just be that most of the recent legal and police procedurals that I have read that are not affronts to my intelligence are British and so authorial competence in this field codes as British to me. It could also be the cover art, which has not been white-washed to avoid scaring off the more timid and xenophobic readers; while the UK is not without its race issues, their television and movie industries are much more likely to cast POC without the POCness being the entire point of casting the actor in question than are American companies.

Poking around, I see the author is a fan of the late Roger Zelazny. This does not feature a wise-cracking first person smart ass but I can see the influence in Gladstone’s mixture of mundane and fantasy tropes, Gods and necromancy cheek to jowl with cigarettes, business cards and power suits. Where Zelazny stumbled and Gladstone doesn’t concerns female characters; Zelazny’s female characters were generally accessories or foils for the male characters – sometimes worse, almost never better — whereas Gladstone is happy to have both Tara and Ms. Kevarian take very different but central roles in this story.

I suspect if we were to put Gladstone to the question, he would also admit to being an avid fan of mysteries because the way in which he combines our modern world with a fantastic secondary world has more in common with legal thrillers and detective novels than it does with conventional fantasies1, even urban romances and paranormal fantasies. He also follows the mystery tradition of having an entire story between the covers of his book; having read the volume after this, I see he has themes that are developed over the series but you can read this book without worrying that you won’t find out how Tara’s first case was resolved without first picking up another dozen books over the next quarter century.

This appears to be a first novel. It would be impressive in any case but particularly so as a debut. Having read this, I am determined to read all of Gladstones I have on hand at one go and I can assure the author he has raised in me lofty expectations for the next few books no author could actually live up to: no pressure!

I will be getting into the possibly unintended implications of certain world-building choices (specifically, the use of a comfortable and familiar cultural-geographic trope) in future reviews. This is in no way ominous. 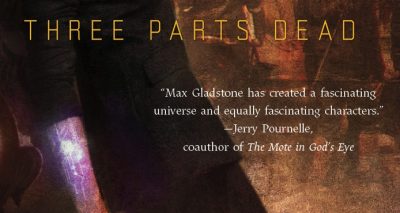 An interesting detail I noticed when I was downloading Chris McGrath’s cover art: the copy I have has a blurb for Carrie Vaughn. The first version I found has a rather different blurb.

I can see why Tor used Vaughn but I am not really seeing a crossover there between Pournelle’s core audience and Gladstone’s so I don’t know why this version even existed.

0. Implications that include prosperity, technological sophistication and basis safety dropping off sharply with distance from urban centers.

1. This raises the danger that he might transfer his skills over to mystery the moment someone points out the mystery market is a good part of an entire order of magnitude larger than the fantasy market. Many mystery writers do not have to dumpster dive for their meals and some even live indoors. Gladstone must be prevented from learning this at all costs.