Today’s Because My Tears Are Delicious to You Review is a very special double review! And not because I want to bump up my stats. The two books I have selected are a pair of thematically related but very different novels that I will re-read back to back. Because ​“Anderson” comes before ​“Silverberg,” I will start the re-read with Mr. Anderson’s novel.

1972’s Hugo-nominated There Will Be Time is the book that convinced teenage me that I liked his fiction. It is part of Poul Anderson’s Maurai series, which included three novelettes (1959’s The Sky People , 1962’s Progress and 1973’s Windmill) as well as a second novel, 1983’s Orion Shall Rise.

Centuries after the Judgment War, the Maurai dominated the Earth, guiding other nations away from destructive machine culture and towards more sustainable ways of life. There Will Be Time begins some time before this golden age, in 1933, with the birth of Jack Havig, an American who will play a very curious role in the history of the Maurai.

Family friend Dr. Robert Anderson knows that Jack is not like the other boys his age. But even that keen-eyed doctor does not suspect just how different Jack is. Jack has a mutant ability to move through time. This gives him access to a vast swath of human history, much of it utterly miserable. It also isolates Jack from other people.

Driven by profound loneliness, Jack sets out to find others like himself. Using the streetlight principle, he searches for people like him, people who are playing tourist at historically significant events. His search is successful; he is recruited by the Eyrie, a community of time travellers determined to use their talents to create a power base in post-apocalyptic America.

As Jack soon realizes, being able to move out of one’s own time does not mean being able to shake off the influence of that time. The leader of the Eyrie, Caleb Wallis, is a product of 19 th century America; he is a hard-core racist. His most trusted allies are worse. What’s good for Eyrie will be very bad for their time-travelling competitors the Maurai (who have no idea the Eyrie exists). The Eyrie will be bad news for everyone not part of Wallis’ ruling elite.

Jack’s one-man rebellion against the Eyrie is well-intentioned but quite possibly pointless. His abilities reveal that the Eyrie will survive and grow well into the future, with Caleb Wallis at its helm.

If there’s one thing Jack has learned, history is fixed.

I have used the cover art from the Signet mass market paperback because that’s the edition I own (purchased at Randy and Sylvia Hannigan’s Book Barn on King Street). Well, also because the cover art for the hardcover strongly suggests that the artist was both hurried and uninspired. 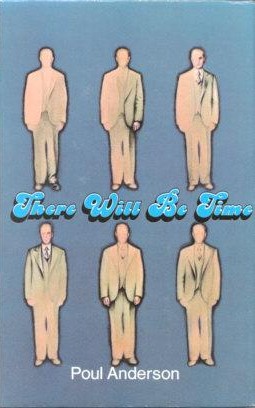 There Will Be Time shares two elements with the other novel in this double feature, Up The Line. (Well, three if you count me having read both. Wait, no, four: you can play the ​“how many pages does it take before the protagonist has sex with a minor” game with both. Page 48 for this book.)

Before I read these two novels, back in the day, I had no idea any vestige of Rome had survived past 476, let alone for the better part of a millennium. Curious about how I had missed such a significant bit of history, I consulted my grade nine history text, The British Epic [1] (no Wikipedia then), wherein I discovered that all Crusade-related material, including any acknowledgement there was a world east of France in the Medieval era, was covered by a single subordinate clause. The Byzantine Empire was not important enough to be included in that clause.

Anyone familiar with Poul Anderson’s oeuvre would probably be able to date this work by Anderson’s evident distaste for modernity as it had developed during his lifetime. Screw Utopian visions. Modern civilization was doomed, doomed I tell you, by decadence and ecological destruction. There was no escape: the foolish left-wing idealists who embraced environmentalism would only do so until they got bored and sought some new entertainment. In the end, calamity must sweep rotten Western Civilization (and everyone else [2]) away.

Readers might also be able to date this by the selections from the (author-imagined) Withit Collegiate Dictionary that appear on pages 27 – 32 of the Signet paperback. The entries include such effervescent bon mots as

Chauvinism: Belief of any Western White man that there is anything to be said for his country, civilization, race, sex, or self.

Fascist: A person who favors measures possibly conducive to the survival of the West.

Xenophobia: The distrust of the ability of strangers to run one’s life for you.[/quote]

But perhaps not. As we have recently seen. the worldview expressed by the Withit Collegiate Dictionary is alive and well today. (If you do not know what I mean, ask! I will be happy to rant at you.)

One might also be able to date this novel by Anderson’s treatment of women. Anderson once said

The frequent absence of women characters has no great significance, perhaps none whatsoever. Certain writers […] seldom pick themes which inherently call for women to take a lead role. This merely shows they prefer cerebral plots, not that they are antifeminist.

There Will Be Time does feature not just one but three women who play a role in the plot.

The one thing that redeems Jack’s grumping about those darn Berkeley hippies and the Plight of the Long-Suffering White Man is his realization that Wallis, the leader of the Eyrie, is dead wrong in recruiting only white people. Those POCs could be useful! Mind you, the facts that the Eyrie’s competitors, the Maurai, are a) not white and b) a Great Power might have helped Jack see the error in Wallis’ tactics.

As you can tell, I had a mixed reaction to the politics of the novel. There are some very Poul Anderson at his morose, reactionary worst bits, but also some evidence that he is struggling with his cognitive blinkers.

Otherwise, it’s a pretty standard 1970s Anderson offering. It’s fast paced but its brevity means Anderson does not have a lot of room for complex characters or plot. The Withit Dictionary aside, everything in the book is there for a reason. Hence the sharp-eyed reader can easily foresee how Jack will deal with his must-change-history/cannot-change-history problem.

There is one plus: when first read, this book (or was it the other one?) clued me to the existence of the Byzantine Empire. For which I am grateful.

There Will Be Time is available here.

1: The British Epic is itself a fascinating historical document and some day I will review it.

2: Protagonist Jack is aware of Asia. His views on the nations there vary between ​“hopelessly stagnant” and ​“intrinsically alien.” Well, he was born in small town America in 1933.