Robert Silverberg is a fascinating figure. His career as a science fiction writer spans over six decades and comprises at least three distinct periods:

I discovered him while he was writing classics like Dying Inside, To Live Again, and Downward to Earth. To me, it’s the serious, ambitious work from the mid-1960s to the mid-1970s that is ineluctably Silverberg.

Of course the first book of his I am going to review is his 1969 time-travel sex comedy, Up the Line. That’s because if There Will Be Time wasn’t the SF novel that revealed to me that Byzantium existed, Up The Line very definitely was. Paired review, remember?

2059 is a pretty swinging place unless (like Judson Daniel Elliott III) you have made a series of poor life decisions and are running out of funds. When his friend Sam suggests that Jud sign up for the Time Service, Jud hesitates. He knows he is not the rock-jawed, stalwart he-man that the Time Patrol likes to recruit. He is, however, capable enough to be a Time Courier. He’s not especially talented or diligent, but he does have a pulse. The Couriers have very low standards.

The Benchley Effect granted access to the whole of history. Couriers shepherd tourists through time, letting the curious moderns gawk at the spectacles of the past while preventing said tourists from tampering with the past. Given that tourists are as a group not overburdened with caution or sense, it’s a demanding job that calls for the best. What the tourists get is Jud.

Jud does have applicable skills. He’s personable (which he applies to seducing his female charges, inexplicably ignoring any dishy men). He knows a lot about Byzantium, thanks to a background in history. For the most part, he is observant and quick-witted enough to stay on top of his charges’ zany hi-jinks.

Or rather, he is until he gets distracted. Nothing distracts young men quite like sex and nobody inflames Jud’s passions like his great-great-great-great (etc.) grandmother, the irresistible Pulcheria. Once Jud’s attention wanders, things begin to go wrong. Very wrong indeed.…

This novel takes a more positive view of the future than does its review partner, There Will Be Time. No inescapable ecological collapse, no nuclear war. There’s still racial tension but it takes the form of passive-aggressive sniping and ethnically cleansing one’s own genetics with technology. Everyone seems to be well to do and comfortable. Of course, being more upbeat than Disco-era Poul Anderson is not exactly a high bar to clear. It’s more of a trench to leap.

This is a sex comedy from the 1960s (combination SF/historical/soft porn; Silverberg had careers in all three) which is to say that it was written in a period when SF authors had realized that it was possible to have sex with women, but before many male authors wondered if women might like some say in choosing their partners. The men in this novel see consent as a welcome extra, not a necessary precondition. If the women are not willing, then it’s OK to use money or force. Sexual assault is definitely considered rude, but it doesn’t seem to be a crime.

First mention of sex with a minor that I noticed: page 69 of the first printing Ballantine paperback.

It is possible that Silverberg’s version of a time patrol is a dig at Poul Anderson’s Time Patrol. If so, I think he is also taking a good-natured shot at another target:

The Lieutenant looked his part. He was the tallest man I had ever seen, with the widest shoulders and the squarest jaw. (…) His uniform was gray. His hair was red and cut very short. His eyes were a soulless blue.

Is there some Kimball Kinnison in the Lieutenant’s lineage? 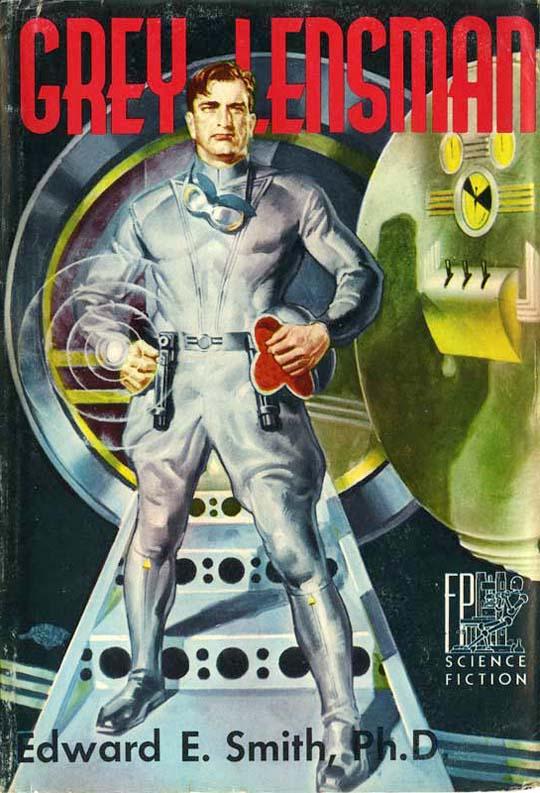 I think there is.

Anderson’s novel focused in Constantinople in the lead-up to the unpleasantness of 1204. Silverberg takes the time to cover far more of the city and empire’s history … or at least the high points that idiot tourists would find interesting. If readers can tear themselves away from the (pretty tame by modern standards) sex scenes, they will pick up a reasonable, if extremely cursory, outline of Byzantine history. Not that you should be learning history from science fiction novels!

Normally I would moan about the idiocy of giving tourists access to time travel, but in this book, the idiocy is plausible. The Couriers exhibit the right mixture of venality and foolishness to engage in such stupidity. I did wonder why the Patrol permits it at all but I suppose having the Couriers around is a form of job security. Couriers mess up, Patrollers fix it. Or perhaps the Patrollers know more about the structure of time than they are letting on

Up The Line is available here. But only if you are British. If there is a current North American edition of Up the Line, I could not find it.

1: If young Robert Silverberg had begun to write his own version of George R. R. Martin’s The Game of Thrones series in January 1958, he would have finished all seven volumes by November 1958.