2010’s A Conspiracy of Kings is the fourth and most recent (but not final!) volume in Megan Whalen Turner’s Queen’s Thief series.

The new alliance between Attolia and Eddis, sanctified by marriage between the Queen of Eddis’ Thief and the Queen of Attolia, put the neighbouring kingdom of Sounis in a very awkward position. Divided, Attolia and Eddis seemed no match for Sounis. United, they force the King of Sounis and his barons to choose between several unpalatable options: make peace with Eddis and Attolia or ally with the expansionist Mede Empire. One option is humiliating but the other may be national suicide.

There is a third option: civil war.

Sophos is the King’s nephew and his unpromising heir. To the disloyal barons, Sophos is a valuable playing piece, a potential hostage or even a malleable figurehead. Ambushed, kidnapped, battered beyond recognition, Sophos vanishes.

Beneficiary of a spoiled aristocratic woman’s whim, Sophos becomes just another slave, someone nobody would deign to notice. This buys him valuable time, to heal and to consider his next move. By the time he escapes slavery, a surprise awaits Sophos: his uncle the King is dead. Sophos is now Sounis, eponymous King of Sounis.

Sounis faces the same hard choices his uncle did: the same disloyal barons, the same opportunistic Medes. When he was Sophos, the Queen’s Thief was his friend. Now the two are kings of rival nations. The demands of state must trump mere personal feelings. For Eddis and Attolia to ally with Sounis, Sounis must be convinced that such an alliance is in Eddis and Attolia’s best interests.

Sounis does not have long. A vast army is marching on Sounis.

The Medes seem to have a diplomatic strain of Victory Disease . They’ve had a long string of successes, adding territory after territory to their empire. While the ambassador does try to make a case that nations join the empire out of self-interest, one senses the smirk of a person convinced that their opponents have no winning moves in prospect. Remember, hold off on the gloating until after the glorious victory.

Governance in the not-exactly-Greece in this series may seem a bit amateur. A lot of that is due to Sophos’ own nature. As a young man, he didn’t take his studies seriously. In his defence, as soon as he understands that the stakes are real — roughly about the time a small army of his uncle’s enemies invade the villa where Sophos, his sisters, and his mother are residing — he ups his game. Not quite enough, in the beginning, but the potential is clearly there.

Sophos’ eventual successes are due to one moment of pure luck — a vapid young woman deciding to purchase him — but it’s possible that this is not chance but the favour of the gods. Perhaps a dubious favour. As we’ve seen in the previous books, being the gods’ chosen tool is by no means safe. Some tools are chosen because they are expendable.

While Sophos’ bold electoral stratagem gets the remaining barons onside (at least for the moment), the victories Sounis, Eddis, and Attolia have had over the Medes in this series are only small setbacks on the scale on which the Empire operates. Worse, Sophos has given the Medes a Casus Belli. How exactly the three kingdoms, their rival rulers and their barons, each one more disloyal and self-serving than the next, will deal with the grand armies of the Mede will be the focus of 2017’s Thick as Thieves . 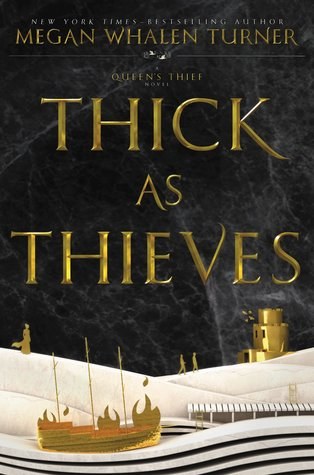 A reason to look forward to 2017! Which makes a nice change from all the reasons to dread 2017.


A Conspiracy of Kings is available here.