Six months after the events of the last volume (Root of Unity), Cas Russell is still wrestling with her unexpected discovery that everyone else has memories that go back more than a few years. Where other people have pasts, Cas has a giant blank and she still does not know what to make of it.

On the plus side, she does have an exciting new hobby: saving Los Angeles from itself.

Cas definitely has a superpower: super-computation. Until recently she used her power for self-enrichment. She was basically what the comic books call a supervillain. Having had her moral compass realigned in the previous three books, Cas decides to use stolen mind-altering technology to encourage … induce … Los Angeleños to stop joining gangs. What could go wrong?

Just maybe something to do with the facts that: the technology is so cutting edge that it doesn’t actually work (which she is sure, with cause, that she can fix); her bold reshaping of LA’s psychoscape is an egregious violation of consent guaranteed to affront her oldest friend Rio; and her intellectual gifts are extremely narrow. The woman who never noticed her own cognitive deficits is not the best person to consider the possible side-effects of such a mind-altering technology (supposing that it actually works).

Plus there’s the increasingly urgent issue that the coping mechanisms she uses to keep her wonderful mind functioning are not as effective as they used to be. In fact, there’s every chance Cas will go stark raving mad in the near future. While there is a possible treatment, it’s a cure Cas sees as worse than the malady.

Hubris! Is there no problem it cannot transform?

I think inflexible, doctrinaire Rio moved from ​“an interesting implacable juggernaut lurking around the edges of the story” to ​“someone who should probably be shot as soon as is practical,” right around the time he embraced the idea of targeting innocents en masse as acceptable collateral damage. That’s the problem with monsters as supporting characters: they’re monsters.

This is Unintended Consequences: the Adventure. Cas has NOT thought through all the different ways humans apply the specific human behavior she is trying to eliminate (the human characteristic she blames for gangs is nowhere near as specific as ​“join a gang”). Cas does still have friends who are willing to discuss her cunning plans. She even consults them. The problem is that if they don’t give her the answer she wants, she ignores them.

The book’s subplots underline the main theme. Cas’ amnesia and crumbling mind turn out to be due to a forgotten friend’s attempt to help her by rewriting her mind. Again, unintended consequences. As for her old friend Rio … Rio is a monster who doesn’t really care about consequences and side-effects. He focuses on one desired end, to exclusion of all else.

As one might expect, poorly thought out, wholesale social rehabilitation has some significant drawbacks. At the same time, Cas can’t settle for trying to fix society’s problems one person at a time. Unlike most of us, she really can understand how large a job it would be to empty the ocean one teaspoon at a time. In this context, her ability is a handicap, because she is denied the comforting innumeracy that allows other humans to ignore the large-scale futility of their efforts.

This is a superhero universe where extremely powerful technology does not vanish just because someone used it once in a failed scheme. Cas definitely succeeds in demonstrating that behavioral modification can be carried out on a large scale, even with modest resources. I wonder how that will play out down the road? One does need some superhuman talents to make Cas’ new toys work correctly, but one of the little lessons in this book is that such talents are not as rare as one might think.

I thought the Rio plot was an unnecessary complication but otherwise I enjoyed this little tale of good intentions gone awry. I did notice that Cas’ attempts to help had a higher body count than her criminal activities, which is saying a lot, given that she used to kill casually, but I am sure the only moral there is ​“megalomaniacal plans to fix society in one go sometimes don’t go quite as planned.”

Plastic Smile and the other books in the Russell’s Attic series can be purchased here. The first three volumes are available in this affordably priced bundle. 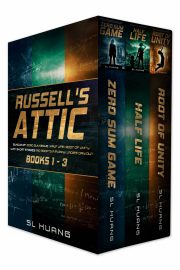