Rescued as a child from drowning by a mysterious stranger Utena knows only as ​“Licky-lick” [2], Utena vowed to be worthy of her savior, the man she yearns to meet again. She will live a strong and noble life.

The Japanese schoolgirl will become a prince!

Utena’s quest to find the man who rescued her isn’t merely a teen-aged obsession. Ever since that day she nearly died, she has received one letter a year from him. Utena is convinced this is proof Licky-lick exists and that he intends for them to meet again.

Utena’s friend Kaido suspects there is no Licky-lick, that the letters come from orphan Utena’s well-meaning aunt. Kaido’s determination to prove this has an unexpected outcome: the letters taken as a whole not only hint Licky-lick is real, but that he might be found at the Ohtori Academy. Kaido’s diligence dooms any chance he might have had to woo Utena; her reaction to the revelation is to enroll at Ohtori, far far from Kaido.

Ohtori is a very odd school. The administration keeps a low profile. The student council on the other hand, is more powerful than the University of Waterloo’s Federation of Students. Other student councils use their power and influence to try to better their schools (or at least close the Imprint office [3]). Ohtori’s council uses their power and privilege to fight duels.

The prize being fought over is the Rose Bride, Anthy Himemiya. She herself is not a fighter, but she has the ability to summon the Sword of Dios, a weapon of unparalleled power. If one wants to revolutionize the world, one must first possess the Rose Bride and her sword. Not that they constitute everything necessary to the task, but they’re a start.

Bold Utena has no idea about any of the broader implications when she duels Anthy’s current owner, abusive Council Vice President Saionji. Utena is just offended by abuse. Only after she manages to defeat Saionji with her broken stub of a bamboo sword does she learn what it is she has won, starting with the Rose Bride herself. The would-be prince has her princess.

Utena’s victory is only the beginning. Others want the Rose Bride and the power she represents. The duel is only the first of many, all fought to serve the goals of the mysterious puppet-master, End of the World.

I have an odd relationship with Utena. My doomed foray into the creative side of roleplaying games (which foundered on the unwillingness of various companies to actually pay my fees for services rendered) included editing two Utena source books. 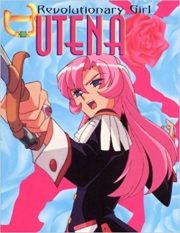 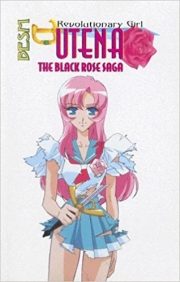 As a result I have had some familiarity with the storylines (or at least one version: the various incarnations of Utena vary somewhat from each other) without ever having seen the source material. Well, now I have.

I cannot say that I liked the manga art; I did like the plot line,. The incredibly dysfunctional relationships of the manga’s characters make for a gripping plot. The teenaged students go all out to WIN, even though they do not understand the nature of the treasure for which they fight, even though they fight at the behest of someone they’ve never met. Competition brings out some of the worst in these kids: manipulative, spiteful behaviors that would make celebrity feuds look like kindergarten squabbles. Almost everyone gets to be a monster and a victim.

Even Anthy goes to eleven in her role as doormat. She submits completely to whoever owns her at the moment. As Utena eventually discovers, this gives Anthy an odd sort of control. All Anthy ever lets people see is the Anthy her current master wants her to be. What she really wants is unknown and unknowable. She cannot be fully grasped. There may be no there there.

Utena cares not for narrow-minded, tightly bounded gender roles [4], something one suspects was inspirational for many readers. When she’s a prince, she’s a prince all the way, from her boy’s uniform to the duel of the day. Her aunt indulges her in this … but I don’t think it would have changed the outcome if Utena’s aunt had been more insistent on gendered behavior. Just once Utena experiments with dressing the way society says girls are supposed to dress. She finds that being missish does not suit her. Being her butch self, on the other hand, leads to victory and an adoring harem (of both men and women).

So far so good. Of course, things may go horribly wrong in volume two. Stay tuned!

Feel free to comment here. And I forgot the link. Fixed now.

1: I am not quite sure how to deal with the credits on this.

2: Because her rescuer licked tears off Utena’s face. A strange adult affectionately licking a kid’s face isn’t even close to being the creepiest moment in Utena.

3: The Federation of Students and the campus papers have had … let’s say ​“complicated” relationship since at least the 1970s. FEDS and the Chevron had a conflicted relationship because the Chevron was taken over by a collection of baby Stalinists who were convinced Enver Hoxa was the best thing since forced labour camps. The more recent friction between FEDS and Chevron​’s replacement, the Imprint, is probably too complex to get into here.

4: Or she’s so committed to them, she adopts masculine titles when she behaves in a way she thinks is masculine.