Tom, Levi and Dorian’s psionic abilities are impressive but it took Justice to weld them together into the Unit, able to span time and space at will. There are limits.Although they can project their minds out of their home space-time, the Unit aways manifests in the same distant location. And what an odd location it is.

The world of the future, if it is the future, is desolate and forbidding, a land of dust and death. In fact, when the Unit appears and then breaks apart into the psychic manifestations of Justice, Tom, Levi and Dorian, it is not at all clear this world has anything living on it at all1. If this is the future, it suggests grim events await us.

As harsh as this world is, it is not dead. There is a complex, alien, ecosystem. The teens soon encounter a dog-like being whom Justice names Miacis. Miacis is not human but she is intelligent and telepathic. The kids are the first beings she has met with similar abilities. Justice would like to befriend Miacisbut as is Justice’s way, she dominates the canid. Miacis calls Justice not friend but master.

Tom is jealous of Justice’s power and tired of being dominated by her. When the opportunity presents itself, he vanishes into the desert. Without Tom, there can be no Unit. Without the Unit, all four humans are trapped in Miacis’ harsh world.

The Avon Flare edition of Dustland had a Leo and Dianne Dillon cover. 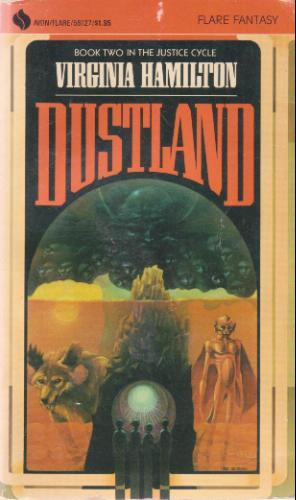 So did the later Scholastic edition. Inexplicably, a number of editions, including the current Open Road Media edition, eschewed that cover. I cannot fathom why someone would not use Dillon art if it was an option. It’s not my favourite cover — wait for an upcoming Because My Tears Are Delicious To You review — but still, it’s better than the inoffensive but forgettable cover the book currently has.

Speaking of covers, this is the cover to the Justice Trilogy omnibus: 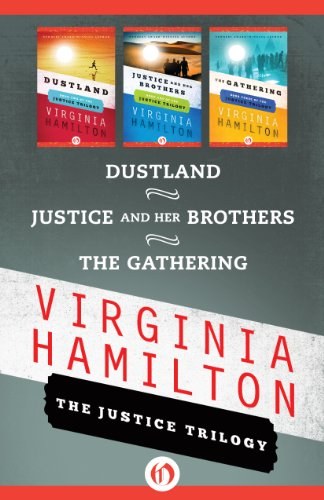 The books are listed in alphabetical order on the cover, which is to say book 2, then book 1 and finally book three. Because apparently we’re counting ​“the” when we sort by alphabetical order now. I really hope, but cannot check because I did not buy the omnibus, that that is not the order the books are in within the omnibus. That would be as absurd as an omnibus that included a stand-alone novel and two books of the subsequent trilogy. 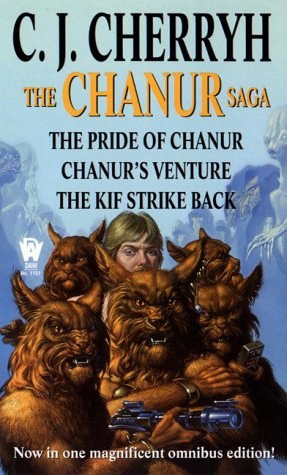 Justice and Her Brothers was interesting enough to put Hamilton onto my ​“read more” list. I particularly found the parallels with Mind of My Mind intriguing. Justice, not having been raised as the property of a soul-eating sociopath like Mind of My Mind’s Mary, is a much more pleasant person than Mary, not that this stops Justice from using her powers to make her playmates play properly.

Tom, in contrast, isn’t very sympathetic at all, which casts his otherwise perfectly understandable desire to be free of his little sister’s rule into a negative light. It’s not so much that Tom wants to be free as much as Tom wants to be free to behave badly. And then there’s his resentment over having been bested by a girl.

Which of Tom or Justice are right or at least less wrong is unclear. What does seem obvious is if Miacis’ future is Earth’s future, the appearance of psychic children will not prevent terrible events from happening. They may well cause those events. Even the children’s loving parents expect that their own powerless sort of human will be driven into extinction by the new humans their children represent. Oddly, they don’t seem terribly bothered by the prospect.

Dustland suffers badly from middle volume syndrome. The plot, such as it is, takes a while to get going and then suddenly stops, as though the author sensed that reader would be enticed into buying a third volume. Readers or at least some readers, will but I resent needing to to find out how the author resolved various plot thread. I probably should have just bought and reviewed the omnibus. Learn from my error!

1: I would say ​“except the fact they can breathe, which implies plants somewhere” but since they’re mentally projecting themselves across space-time, the air they breathe is 20th century Earth air.