1993’s Parable of the Sower is the first volume in Octavia E. Butler’s Parable of the Sower duology. Here Butler explores a very American theme. From Huck Finn to the Joads ,from the Mormon pioneers to the Donners, from On the Road to The Road, nothing expresses the boundless possibilities of America like the road trip.

Lauren Olamina’s 2020s America is one that makes road trips challenging and eventful.

Climate change and a long, inexorable economic collapse have driven America into chaos. Lauren and her family appear comparatively lucky: her father has a job and their community has sturdy walls. Many Americans are less fortunate—which is why LA (like the US itself) is essentially a quilt of war-zones and walled enclaves.

The Olaminas’ luck is fragile They own enough to be worth robbing. Their defences—walls, guns (of course), and vigilance—are inadequate to keep out the desperate. Nor can those defences protect family members who must leave them. Lauren’s brother is the first of her family to be murdered, victim of his misguided foray into the life of a gangster in the city. Lauren’s father simply vanishes on his way home from work.

When the painted raiders attack, the community’s feeble defenses fail catastrophically. Their homes now burnt ruins, their families dead or missing, Lauren and two other survivors head north towards what they hope is a viable refuge. What lies between them and their goal are hundreds of miles infested with bandits .,., and worse.

I’ve used the cover art that I did because that’s the art on the edition I own. The original art looks whitewashed to me, which is actually pretty unusual for Butler in general but perhaps not for this book in particular. 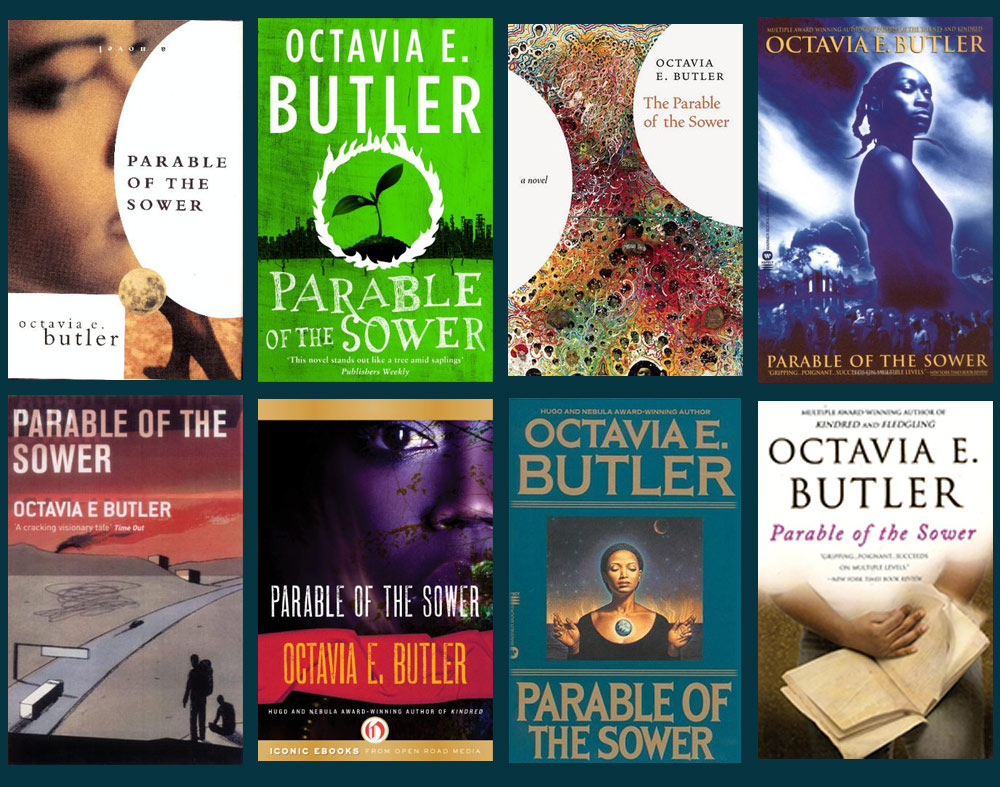 It’s very Butlerian of Butler to give her protagonist what would be a superpower in many contexts, but in the one context that makes the ability detrimental. In previous works:

In the book under review, protagonist Lauren has hyperacute empathy, which in a Hobbesian world of all against all is not a power at all. It’s a handicap.

Butler’s slowly imploding US [1] is an unusual patchwork for works like this. In many areas, police presence is notional. In California, the murder rate is so high that it’s surprising there are still people to murder. At the same time, some companies are able to improve their bottom line by exploiting the desperate. Somehow, business and trade continue. While the federal government’s ability to control the states is slipping, it manages to operate a base on the Moon and send an expedition to Mars [2].

Lauren is a rather prickly character. Given her disability and her circumstances (such as her entire family being annihilated by jealous fellow Angelinos) it’s understandable why she would be. She still retains ... if not hope for a better tomorrow, at least some idea what that better tomorrow might be. She and the other survivors are smart enough to see that they are better off together than they would be apart. Unlike the bandits, they don’t see the refugees they encounter as potential victims but rather as potential allies. It’s a harder strategy in the short run, but the only one that can ensure there will be a long run.

I don’t believe I ever read the second book in the series [3], so I cannot say if Lauren’s plans to create a new and better order ever come to fruition. Given Butler’s other books, it could go either way: Lauren could create something close enough to her ideals to satisfy her or she could inadvertently create something much more horrible than the current calamity. At some point I should really find out how this series ends.

Parable of the Sower is available here (Amazon) and here (Chapters-Indigo).

1: It’s not clear how the rest of the world is faring. However, as Canada has not exploited American weakness to retake portions of the west coast that are legitimately ours, my guess would be that Canada is just as messed up as the US.

2: Well, the US did have those outposts. The President who is elected at the beginning of the book promises to put an end to all that useless space stuff, since America has more pressing concerns. The President is painted as a bad guy. Agree or disagree?

3: I have also carefully avoided reading Fledgling, Bloodchild and Other Stories, and Unexpected Stories because once I do read them, that means no more new-to-me works by Butler, ever.