The climate changed and the oceans rose. Humanity’s cities have either drowned or have become mere shadows of what they once were. The last remnants of humanity are slowly dwindling away into extinction. The general decline poses many challenges to Alpha Hatsuseno, proprietor of a small coffee shop some distance from the much reduced Yokohama, but she accepts them with inhuman calm.

Alpha, you see, is an android. Humans may be doomed but their technological children are doing just fine. As is the Earth.

Abandoned by her owner some time before the story opens, pleasant but shy Alpha makes her way across the remnants of Japan to purchase supplies for what is now her cafe.

This sets the stage but raises more questions than it answers. It is very obvious from the beginning that this is a low population future. The rise in sea level forces Alpha to detour on her way to the new Yokohama, uphill from the original. 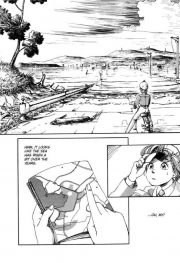 How the world got to this point is not explained.

If you’re expecting Mad-Max-style adventures on the way to and from Yokohama, you have picked up the wrong manga.

2: The Misago of the Bay

This may be the most amiable post-apocalypse story I have ever read. It’s almost Simakian in the way the End of the World as We Know It can’t stop people from sharing quiet moments together.

It’s not clear what the Misago is. She doesn’t seem to age. I would speculate that she was some sort of nature spirit tied to a particular location … but if she is, she’s the only supernatural element in an otherwise mundane world. And you know who else doesn’t age and is socially awkward? Alpha, the coffee shop proprietor.

Alpha is presented with an insurmountable opportunity: a surfeit of watermelons!

Alpha eats human food, although she is an obligate vegetarian. Not only do the gentle androids not have to kill animals to feed, there would be no point to it if they did. They cannot digest meat. Interesting design choice.

Biking in a sudden summer storm: what could go wrong?

The world may be almost empty; much of it is returning to wilderness. It’s odd that there’s no problem getting the right materials to repair Alpha. Someone somewhere off-stage is still making techie doodads.

A celebration of Alpha’s recovery reveals one of Alpha’s heretofore hidden talents.

The art in this can be addictive, particularly when the artist is focusing on nature. Oddly enough, Alpha is more realistically drawn than the humans; she looks like a manga-esque slender woman. Some of the humans, in particular the old man who runs the gas station, look downright bizarre. 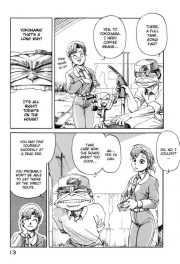 Androids can get drunk. Another interesting design choice. Androids are clearly intended to be able to interact with humans in the usual ways, including convivial drunkenness. There are enough differences, however, that we do not find ourselves in the uncanny valley all that often.

The crowd at the meeting house has an interesting age spread: mostly adults and one boy, Takahiro. As far as I can tell, there are no other children Takahiro’s age in the community. This world may be an example of the fifth stage of the Demographic Transition Model: a low death rate, a low birth rate, and a slow but steady decline in population. This may explain why nobody seems all that concerned that the humans are vanishing: it is a very slow process, and to any particular cohort their condition would seem natural.

Takahiro and Alpha brave the mid-winter cold to take part in the traditional New Year’s celebration.

I count about thirty people at the bonfire, and perhaps three children. I am thinking DTM Stage Five is the way to bet here.

Braving the crumbling roads of futuristic Japan, a messenger presents Alpha with the unexpected: a message from her long absent owner.

This series is the Mr. Rogers of Post-apocalypse fiction, a series in which every chance to generate drama with conflict and violence is firmly rejected in favour of a positive vision. Ashinano seems to deliberately thumb his nose at genre conventions when he introduces Alpha’s pistol. To quote Chekov:

Remove everything that has no relevance to the story. If you say in the first chapter that there is a rifle hanging on the wall, in the second or third chapter it absolutely must go off. If it’s not going to be fired, it shouldn’t be hanging there.

If there’s ever been an authorized English translation of YKK, I am unaware of it.