World reaction to the revelation that vampires really do exist has varied. Some nations opted for cautious, monitored co-existence. Others simply drove the vampires out. Twenty-first century Mexico did both: Mexico was for many years a haven for vampires fleeing their former home nations, but Mexico City was declared a no-go zone for the blood drinkers.

Declaring it was one thing; enforcing it another.

Atl’s fearless embrace of her people’s vengeful traditions earned her family brutal deaths at the hands of the Godoy vampire clan. Atl survived the bloodbath and the hunt that followed. The Godoys are powerful and their network of allies is everywhere. It is only a matter of time before they find her.

Mexico City offers her an opportunity to seek out old allies. It may also give her a chance to escape Mexico for Guatemala’s comparative safety. But Mexico City also offers her excellent odds of a brutal death, either at the hands of the Godoy retainers stalking her or at those of Mexico City gangs. Like the Godoys, Atl is a vampire and the human gangs ruthlessly enforce the ban on vampires

Defined by her hunger, Atl needs to feed. The prudence she is only belatedly embracing says ambushing and draining a human would only alert her enemies to her presence. Instead she pays street-kid Domingo for some of his blood. That should have been the end of the matter for the young man but like so many people before him, he mistakes predation for affection and attaches himself to Atl.

A willing renfield could mean the difference between death and survival for Atl. It could also mean that instead of one victim to slowly torture, Godoys will have two.

Just as I spend more time at plays looking at the set pieces, backdrops and lighting design than at the actor, so too did I spend a lot more time thinking about the background assumptions than most people might. In this case, the author plays to one of my obsessions, because this could be Mann’s 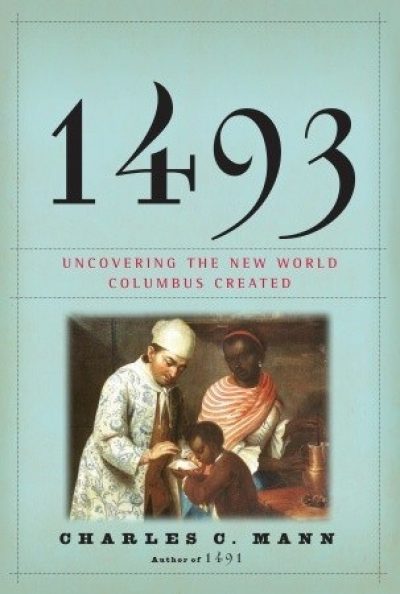 1493 reimagined as a vampire novel.

For the most part, this could be seen as a science fiction novel: humans turn out to have very specialized predators living among them, killers whose superficial similarity to humans allows them to feed for the most part unnoticed. It’s rather like the myrmecomorphy that enables certain spiders to prey on ants. There are other parallels to the natural world. The Necros vampires spread a disease that makes their victims suggestible before it kills them; one part syphilis to one part Toxoplasma gondii.

The author postulates that there several vampire sub-species. The New World boasts at least two native subspecies, as well as recent arrivals like the Wendigo and the Necros. One of the native subspecies is tlahuihpochtli … perhaps the descendents of a small population of vampires that dogged the original human migrants as they made their way from the Old World to the New. Atl is a tlahuihpochtli. Her kind are being pushed aside by invasive Old World Vampires. A nice touch, that. Just what one would expect from the Columbian Exchange

Atl’s poor dupe, the street-kid Domingo, is befuddled by Atl’s beauty. (Presumably that’s the result of aggressive mimicry ; having your prey positively enthusiastic about getting up close is an advantage in the old predation department. ) He makes a classic mistake, which is to assume that someone who is beautiful must be good. In his defense, he is a fan of romantic vampire stories. If vampires did exist, I imagine that they would be subsidizing such things; they make food more cooperative 1.

Atl is an obligate parasite, often a killer, so making her more than an anti-hero is no small achievement. Moreno-Garcia manages this in part by making Atl’s main enemies an even more unpleasant lot. But there is more to this sleight of hand than simple contrast. The author makes Atl a sympathetic enough character that the reader actually worries about the fate of this blood-drinking monster. It helps that Atl is able to do something that most other vampires avoid, which is to have a bit of empathy for her food … and not just the sort of shallow empathy that would let her better manipulate her victim.


1: I suspect vampires were also the ones who convinced humans to slather themselves in tasty garnishes, thinking them as a means of ​“protection.”