The sixth and final volume of Hitoshi Ashinano’s Kabu no Isaki was published in 2013. Much to my surprise, this volume contains answers to a few of the nagging questions unanswered in earlier volumes — just not the answers I expected.

Concerned that Kajika feels sidelined by Isaki’s ongoing monopolization of the Cub, Shiro takes her sister to a distant warehouse for a very special surprise.

The economics of aircraft seem rather odd in KnoI. Planes don’t appear to be much more expensive than cars or trucks and people use them to ship quite minor objects. Somehow, everyone manages to make enough money to stay afloat.

Kajika diligently begs a ride to school from Isaki, only to remember once she gets there that it’s Sunday and there’s no school. It’s not a wasted trip, however, as it lets her spend time with Acchan.

Acchan’s efforts to recruit Kajika for track and field once again fall on deaf ears. She may be an exceptional runner, but running is not where her interests lie. Acchan may also be angling towards asking Kajika out, but he is too shy and Kajika too oblivious for that to work without the help of a third party.

Kajika spends time with her friend Hako-chan. Hako is obviously shipping Kajika with both Acchan and Isaki, for all the good that will do.

Did I say ​“Kajika (is) too oblivious for that to work without the help of a third party”? Add ​“a third party armed with unambiguous visual aids.”

Isaki takes the Cub up just for a spin, and in so doing rediscovers his love of flying.

Apparently some people discover that doing something once fun for money kills the fun. These people are not of the flesh.

Sayori offers Isaki the chance of the lifetime, but taking it means leaving his familiar niche.

More to the point, it would mean leaving his friends. It is essentially the same deal as with Kajika and the track team: it’s a nice opportunity but Isaki and friends have something better.

For once, Shiro actually does some deliveries, one of which takes her to the airship seen earlier in the series. Her bashful friend on the airship admits to wondering if four years of exploration have been pointless. Shiro reveals that she’s heard the same complaint from previous airship crew.

An enigmatic conversation with local character Jii-san, whose hobby seems to be appearing out of nowhere when people least expect him. This draws Isaki’s attention to his neighbour Shiro’s curious disinterest in the wider world.

Isaki questions Shiro re her reclusiveness. Shiro admits to it and then … before expanding on the topic, somehow transports the two of them to a vast plain. For privacy. WTF? 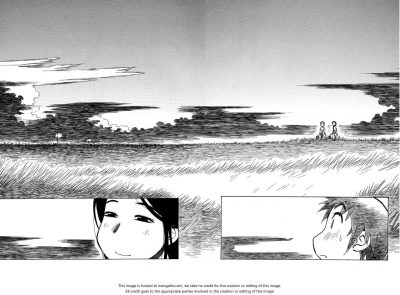 Central characters are starting to consider the oddness of the world as it is now. This is something the majority seem to have silently agreed never to do. Even though they agree that the world is ten times bigger, few of them ever ask ​“bigger than what?”

Short version: Isaki is growing up and that means becoming a different person. Long version: the significance of Shiro’s previously unmentioned superpower (teleportation) is unclear.

Shiro and Isaki discuss his future. And his present. As much as she can in the minute of time left to them in this odd pocket universe. And even though Isaki won’t remember anything Shiro tells him.

It seems that Isaki is living in a strange reality, one to which he has been brought by his older sister. Shiro seems to be the only person fully aware of the rules of this realm and she’s not sharing. It might not matter if she did. One side-effect of living there is amnesia.

The Cub and Isaki

Teenaged Isaki enjoys an outing on his postal-surplus Cub scooter.

As far as I know, there are no authorized English editions of Kabu no Isaki.