1978’s Lamarchos is the second installment in Jo Clayton’s Diadem series; my review of the first book is here. I plan to slowly work my way through the rest of the series (especially if people keep tossing money at me to do so); I’m hoping that I like the later installments more than I liked this one.

Our heroine, Aleytys, has several long-term goals: find her mother’s people, and find some way to master, if not remove, the alien artifact currently meshed to her nervous system. She also has a short-term goal: earn enough money to sustain herself and her baby. For the moment, the short-term goal (survival) takes precedence. That’s why Aleytys and her lover Stavver have made an uncomfortable alliance with the questionably sane criminal mastermind, Maissa.

They have been tasked to help out with what seems a straight-forward con job: bilk some low-tech rubes on backwater Lamarchos out of valuable gems. Aleytys’ psychic talents and Stavver’s criminal expertise should make that easy-peasy.

If only Lamarchos’ gods weren’t real. And very interested in what Aleytys can do for them …

Aleytys has disguised herself as a gikena, a local holy woman. The elemental forces native to Lamarchos decide to take that at face value. They are willing to allow Aleytys and Stavver to pursue their larcenous goals, but only if Aleytys embarks on a few quests for the gods.

The first quest is easy enough: clear the name of a young man unjustly outcast for rape, a crime that he did not commit. For someone with Aleytys’ gifts, it is not hard to prove that Loahn was framed by a jealous step-mother.

Then she is asked to rid the planet of its obnoxious off-world exploiters. This is tricky; Aleytys sees the gods’ demands as entirely out of proportion to the actual harms the off-worlders have caused. How can she satisfy both the gods and her own conscience? Her solution is rather ingenious.

Matters are going fairly swimmingly up to this point, so it is a pity this is when Maissa opts to complicate things by drugging her companions and running off with the gems and Aleytys’ baby. Even worse, Maissa is running off in the direction of Aleytys’ next big quest, a ravening zombie horde.…

Remember the Evil Overlord’s checklist? If there is a similar list for career criminals, I would guess that ​“don’t work with murderous psychopaths” probably is listed somewhere in the top ten. Maybe top three. We don’t have to wonder if Maissa is going to betray her allies, just when.

DAW gave this book some eye-catching packaging. The front cover 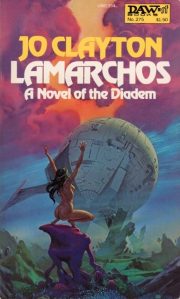 is inspired by of one of the scenes in the book, but all I can think is that this book should be called Aleytys’ Quest for Trousers (having looked ahead, I know that this was something of a running them for the covers in this series). The back cover 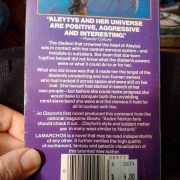 seems unenthusiastic, not to mention misleading. It claims that ​“LAMARCHOS is a novel that can be read independently of any other.” Actually, it’s in no way a standalone. While Clayton provides enough information for new readers to follow what is going on, the novel ends on a major cliff-hanger. I cannot imagine someone who enjoyed this wanting to put off reading the next installment.

As did Norton, Clayton mixes SF tropes with fantasy. Also as in a number of Andre Norton novels, the future is unevenly distributed; some worlds are hi-tech, some are barbarous. There are tech cities and primitive outlands. However, Clayton doesn’t tell us very much about the tech; we never see the worlds (at least in the first two books) that build the starships that take Aleytys from one rustic planet to the next.

I’ve come to expect DAW books of this period to be rather rapey. That has certainly been the case in the Clayton books I read before this one. Lamarchos exceeded my expectations in an unpleasant way. It makes a certain sense that the Big Bad not only rapes minds, but rapes bodies as well. We also learn just why Maissa is such a basket case; she was pimped out by her mom when just a child. Lamarchos was rapey-er than Diadem. I hope that this is not a harbinger of even more rape to come in the next volumes.

I am going to disagree with Ian Sales, at least where Aleytys herself is concerned. It’s pretty clear that Aleytys doesn’t just shrug off all the terrible things that happen to her1. She has something akin to PTSD. Invulnerable characters don’t have nightmares about their past. I would also question Sales’ assertion that Aleytys is a special snowflake. She has a few *special powers*, but they seem to get her in trouble more often than they get her out of it. They’re plot generators. Besides, ifshe were truly a special snowflake, her kindly nature (she’s forgiving) wouldn’t blow up in her face as often as it does.

I do agree with Sales that this book in the series is something of a letdown. I hope the next volume is better. I will no doubt find out.

As far as I know, this novel is not in print.

1: When Aleytys is raped, Stavver reacts with huffy jealousy. I found myself wondering just what Aleytys sees in him. He has a number of bad qualities, but this one is certainly a red flag.