For some reason, my commissions in October were dominated by books by men.

My total for writers of colour (using the ​“Assuming a Trump Presidency, could their race be used to justify deporting them from the US, even in the cases of people who were born in the US’’ for edge cases): 8 (28%) for October, 34 (12%) for the year. 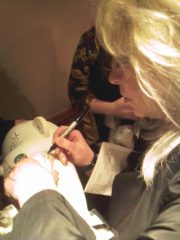 Tanith Lee died earlier this year. She was extraordinarily prolific, writing more than ninety novels in a career that spanned six decades. Too many of her books to list here were nominated for awards but her wins include Death’s Master (BFA), The Gorgon (WFA), Elle Est Trois, and (La Mort) (WFA); in 2013, she was presented by a Life Achievement WFA. Clearly she was a writer of significance but in recent years she had not received the attention her talent deserved.

When I heard the news of her death, I decided to commemorate her career in this very small way, by reviewing a wide selection of her published works.

My tentative list, created after soliciting selections from Lee fans is as follows. I may modify it depending on availability.