Two reasons for this review: 1) I have been in the mood for superhero stuff recently and 2) I read a book about Wonder Woman last week. A book which reminded me that Wonder Woman ended up tied up a lot, and that her creator had a bondage kink. Which led me to wonder if there were any more superhero + bondage stories out there … which in turn led me to Adam Warren’s comic series Empowered. Perhaps I should have started with volume one of the collected Empowered stories, but I misread a catalogue entry and reserved Empowered Unchained, which collects several special issues.

Empowered is the nom de superhero of Elissa Megan Powers, AKA Emp. She is famous, not so much for the skill with which she uses her degree in Metahuman Studies or for the superpowers granted by her hypermembrane suit, but for the extreme unreliability of her suit. Consequently, all too often she ends up hog-tied and immobilized in some undignified pose by one of her obnoxious enemies.

The suit is skin-tight. When it is not in shreds. Oh, and Emp has body image issues.

There’s a sub-genre I call ​“premature interstellarism”, stories about unfortunate explorers and colonists whose toolkits are, alas, not up to the challenge of exploring or settling other planets. Given the long history of failed colonization efforts on Earth, the planet on which we actually evolved, the idea that some colonization efforts would fail seems like a no-brainer. 2015’s Aurora is an example of such a book, standing next to such works as Poul Anderson’s ​“The Alien Enemy,” Joanna Russ’ We Who Are About To…, and Brian Stableford’s Daedalus series.

It’s a rare book that fits into just one possible sub-genre. There is a far larger, more important sub-genre to which Aurora belongs and that’s Books with Idiot Plots.

Trigger warning for physicists and biologists: this is supposedly hard SF, which is to say SF that provides enough technical detail that the reader can be certain that various mechanisms and events couldn’t work the way the author has them working. Also, spoiler warning.

1993’sThe Phoenix in Flight is the first volume in Sherwood Smith and Dave Trowbridge’s Exordium pentology.There is a new edition of this volume, but this review is of the 1993 edition, because that is the edition I happen to have on hand.

But now Eusabian has learned how to exploit the still-functioning relics of the long-vanished Ur. With the Ur’s instant communications and their stupendous power sources in his possession, the balance of power has tilted decisively in Eusabian’s favour. The time has come for his vendetta, his ritual paliach.Which in its purest form ends with the display of the severed head of the enemy.

The sleepy little town of Fort Repose is only vaguely aware of events outside its borders. Given their druthers, certain members of the community — the Daughters of the Confederacy, the White Citizens Council — would prefer that they be even less aware of the outside world and its alarmingly modern ideas. The isolationists are going to get their wish, but not in a form they would have wanted.

“Alas, Babylon”: that phrase in a telegram from his brother Mark, a SAC officer, warns Randy Bragg that the long cold war between East and West is about to become hot.

1978’s Shadowfire, second book in the Birthgrave trilogy, was originally published by DAW Books under the more lurid title of Vazkor, Son of Vazkor . Lurid ​“because the DAW in DAW Books stands for Donald A. Wollheim and if he could have, he would have published the Bible as an omnibus of War God of Israel and The Thing with Three Souls .” Shadowfire isn’t exactly an informative title, but Vazkor, Son of Vazkor is only informative if you’ve read The Birthgrave and if you happen to know that this book is a sequel to The Birthgrave .

And gave it this cover: 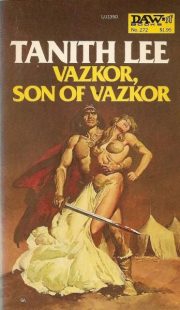 The son of Vazkor is actually named Tuvek. Whereas his late father was an ambitious warlord whose grand schemes left cities in ruins all across the continent of his nameless world, Tuvek is but one of a number of sullen, violent youths in an unremarkable barbarian tribe. He does not know that Vazkor was his real father, though he does have something of an inkling that he is not quite like the people who have raised him. His suspicions fall far short of the truth.

And then comes the day of the Boys Rite.

The Death and Life of Great American Cities is Jane Jacobs’ 1961 polemic on what makes cities work and what makes them fail. She wrote in reaction to the dominant urban planning doctrine, doctrine that she saw as counter productive.


Although Jacobs thanks a long list of people for their assistance in writing this work, from Saul Alinsky to Beda Zwicker, the name ​“Robert Moses” is strangely absent. Curious, since one could argue this book might never have been written without his efforts to shape New York.

I like to believe that I am blind to ads, but this review is proof that I may be deluding myself. The Comics Curmudgeon has been running a banner ad for Jill Lepore’s The Secret History of Wonder Woman on their Livejournal feed; then I happened to see a copy of this book at Kitchener Public Library. Reader, I snagged it. Hmmm.

The title is a bit of a misnomer. It’s true that much of the book deals with Wonder Woman, one of the so-called Big Three superheroes at DC Comics, someone often mentioned in the same breath as Batman and Superman. However, even more of this book is devoted to the circumstances that led to Wonder Woman’s creation.

Last week I had a very annoying evening. I wanted to read in a very specific genre — superhero fiction — but every book that looked interesting was either not available in a format I wanted to purchase … or might have existed in that format but was effectively concealed from me by Kobo’s grotesquely ineffective search function.

Eventually, I discovered that Seanan McGuire’s site offered a selection of her Velveteen stories. So I read those.

I believe the stories on her site are those also found within Velveteen vs. The Junior Super Patriots, so I am going to pretend I went out and acquired a copy of that.