Bob Shaw’s 1977 Who Goes Here? Is the first of his Warren Peace comedic SF novels. It is also the first Bob Shaw novel I ever read.

Warren Peace is utterly untroubled, perfectly content. This is because he is an amnesiac. Warren remembers nothing because his memories have been artificially removed. His memories were removed by the Space Legion at his request. In return, Warren signed up for a thirty-year1 tour of duty with the Space Legion.

Why Warren did this is a mystery to Warren. Amnesia. His new employers don’t care, not least because they suppose that if Warren wanted to erase all his memories, he must have been a complete monster.

Vance Garamond is a competent starship pilot but a terrible babysitter. He fails to prevent his boss’s son from falling to his death. His boss, Elizabeth Lindstrom, the autocratic president of the company that controls interstellar flight, is notoriously vindictive. Rather than wait to see what form her vengeance will take, Garamond collects his wife Aileen and son Christopher and flees to the stars in a commandeered flickerwing starship, the Bissendorf.

Bob Shaw’s 1969 novel The Palace of Eternity is almost a mirror image of this week’s Tanith Lee: it starts off looking like the hardest of hard SF, then heads off into territory more often associated with fantasy.

Sickened by his experiences in the great war between humanity and the alien Pythsyccans, retired soldier Mack Travener settles on the planet Mnemosyne. Conventional interstellar craft cannot approach the planet, which is surrounded by a shell of fragments left by two shattered moons. Mnemosyne seems doomed to remain an eternal backwater. Inexplicably, despite its rustic nature, the planet is a hotbed of creativity, particularly artistic creativity.

Mack’s attempt to reinvent himself as a civilian mechanic on a planet of peaceful artists is short-lived.

1979’s Vertigo is not my first Bob Shaw novel. That would be Who Goes Here.

It’s also not my favourite Bob Shaw novel. That would be The Palace of Eternity. 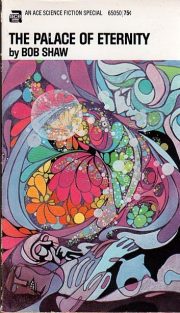 It is, however, the only Bob Shaw novel set in Canada1.

Well, Alberta. But as an Ontarian I regard all of the lesser provinces with equal favour. At least they aren’t Manitoba! Well, except for poor Manitoba.

Today’s venerables mourn the bustling Moon bases and omnipresent jet packs promised by the futurists and SF writers of ages past. Air Patrolman Rob Hasson’s twenty first century may not have moon bases 2, but it definitely has the counter-gravity harness, that marvelous device that gave the freedom of the skies to millions.