T. A. Heppenheimer’s Colonies in Space is just one of the many Disco Era books and articles published proposing that the Next Big Step for humans in space would not be settlements on Mars or the Moon, but rather grand space stations. The idea was very popular, at least until reality ensued.

These days, Heppenheimer may be remembered as the spoilsport who pointed out that Bussard ramjets are far more effective at dissipating energy than they are at generating it (which is to say, they’re not propulsion systems but brakes). Yet he too was a space colony enthusiast. I remember his book fondly. What I cannot do is resolve the teeny-tiny font in the paperback edition, 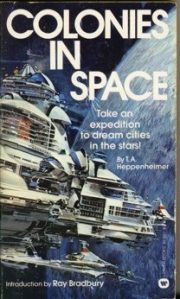 So it was with great glee that I discovered that the National Space Society has made the work available online for free. I like free! It’s even better than cheap!