I have known Heather Rose Jones on Livejournal for some years, but only now have I read one of her novels: the 2014 Daughter of Mystery: a Novel of Alpennia. Review tout court: I enjoyed it.

Dutiful relatives took the orphaned Margerit Sovitre into their household, offering her the very best bourgeois upbringing. Despite this, her prospects are not especially golden, save for one thing: the wealthy Baron Saveze is her godfather. Her bourgeois kin have great hopes that he will do something for her; she herself is not inclined to place too much dependence on the Baron’s future largesse. He is in delicate health and may not have much of a future in which to bestow largesse.

It comes as a tremendous surprise when the Baron dies and leaves his vast fortune to Margerit. It is even more of a surprise to discover that the Baron has also willed Margerit his armin. An armin is not a what but a who, a personal bodyguard. In the Baron’s case, his armin was a young woman named Barbara.

These revelations are not greeted with universal joy by all involved.

In Diana Wynne Jones’ 1984 standalone novel Archer’s Goon, thirteen-year-old Howard Sykes returns home to discover a stranger in his home. Rather alarmingly, it’s a very large stranger, the very goon of the title, and he’s not going anywhere until Howard’s father Quentin delivers the two thousand he owes someone named Archer.

Frank Herbert’s 1965 fix-up novel Dune is the first novel in his ongoing (and thanks to necrolaboration, undead) Dune series. While the original novel may be overshadowed by the feculent dribblings of Brian Herbert and pen-for-hire Kevin J. Anderson, in its day Dune was pretty highly regarded. Awards include

Not bad. So how does it stand up more than a half century later?

The planet Arrakis! Also known as Dune! Sole source of Spice, the mysterious substance that grants longer life and enhances awareness, even allowing a lucky few to see into the future itself! Life extension alone would make it valuable, but its role as psychic steroids makes it a necessity for interstellar trade. Without spice, ships would be lost to unforeseeable dangers in the interstellar deeps.

That’s the theory, anyway. As the Atreides family is about to find out, theory and practice often differ.

You might think after my experiences scrambling to find the books I wanted to review for the Fifty Nortons in Fifty Weeks project, I would have learned to acquire all the books needed for grand projects before I launched them. Nope, which is why I am reviewing Tanith Lee’s 1976 standalone fantasy The Winter Players now, in May 2016, and not back in late 2015 as planned.

Bronze-haired Oaive is the latest in a long line of priestesses, each trained by her predecessor in the arts of magic. Their duties are to protect their village and to guard the three sacred relics hidden within the shrine: the Ring, the Jewel and the Bone.

Sixteen-year-old Oaive has been priestess for just two years when the grey-haired stranger comes to town. He ends a way of life that has persisted beyond memory and history.

For the life of me, I cannot remember how Andrea K. Höst’s 2011 Stray, the first volume in her Touchstone trilogy, got into my to-read queue, but I am happy that it did.

Cassandra Devlin’s plans involve high school graduation and one last party with her friends. They do not include somehow stepping from her native Australia to an unfamiliar alien world. Guess which option she gets? 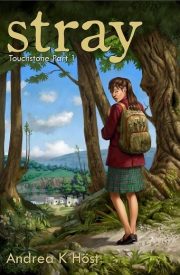 The people who chose my reading for me between 2001 and 2014 only ever sent me Judith Tarr’s historical fantasies, so that’s the genre I associate with her. 2015’s standalone novel, Forgotten Suns, isn’t a historical fantasy at all. Instead it’s a science fantasy that could almost have been written by middle-period Andre Norton1.

Nevermore used to be home to a civilization. Now only nomads call the world home. Five thousand years earlier, something brought Nevermore’s civilization to an abrupt end. Much to the frustration of Aisha’s archaeologist parents, on Nevermore for the first real scientific study of the catastrophe, whatever that something was left no hint as to its nature. It is almost as though the inhabitants of the entire planet packed their bags and left … which would seem to be impossible, because the locals had not yet achieved conventional spaceflight.

Results so far: lots of questions and no answers. Consequence: funding for the expedition will probably dry up. Aisha is faced with leaving Nevermore, the only world she has ever called home. Her solution: borrow a small quantity of explosives and carry out her own one-woman exploration.

Of course, it helps if, unlike Aisha, one reads the instructions on the explosives first. One might avoid discovering the hard way that what seemed like a small amount of explosives was in fact gross overkill.

I should just admit to myself I have no self control when it comes to binging on series (novels or comics). But will I? NO. I am going to kid myself (again) with ​“OK, just one more volume of Hitoshi Ashinano’s Yokohama Kaidashi Kikō and then I will stop. Really.” Because that could totally happen.

Robert A. Heinlein’s 1963 fix-up novel, Orphans of the Sky, was originally published in two parts, Universe and Common Sense, in 1941. I have chosen it for my 100th Because My Tears are Delicious to You review both because it was extraordinarily influential on a very specific subgenre, but also because it happens to be an important book to me. More on both later.

Hugh Hoyland has lived his entire life in the Ship. Indeed, he cannot imagine a life elsewhere, because as far as he and his people are concerned, the Ship is the whole of the universe. An inquisitive young man, his curiosity and native intelligence win him a place as a Scientist, one of the aristocrats of the Ship. Lucky for him, because the alternative destination for inconveniently curious young men is the converter, where their dissolution will provide power to the Ship.

Hugh’s curiosity proves his undoing; his exploration party is ambushed by Mutes and he is left for dead.

His story does not end there.

I last read Megan Whalen Turner’s 2001 novel The Queen of Attolia on January 1st, 2003. I know because I still have the report I wrote for the SFBC. I also know — now — how grateful I should be to Andrew Wheeler for not making my reports generally available1. ​“Unduly harsh” is the kindest thing I can say about my thirteen-year-old review of The Queen of Attolia.

An explanation but not an excuse: I read Queen without reading The Thief, the book to which it is a sequel. This is fine for some series books (I cannot say my (non)enjoyment of whichever Time of Wheel book I read or that Throne of Games book where people did nasty stuff was in any way affected by not having read the preceding books) but not for this one.

How often can one talented thief, even one as talented as Eugenides, the Queen’s Thief of Eddis, sneak into the Queen of Attolia’s heavily guarded buildings?

One time more than he can successfully sneak back out.

Tanith Lee’s 1989 Women as Demons: The Male Perception of Women Through Space and Time is, like Red as Blood or The Gorgon, a single author collection. Oddly enough, I had never seen this one until my niece Amy bought it for me. This may be because the collection has, as far as I can tell, had exactly two editions in the last quarter century. More on that later …

The title is pretty descriptive: Lee is writing about women as figures of malign, terrible power. Will she embrace the trope? Will she subvert it?

She certainly ranges across the full scope of speculative fiction.