Clifford D. Simak’s City contains material written in the 1940s, material that wasn’t collected into book form until 1952. New interstitial material transformed it into something like a novel.

City was popular and has been reprinted in many editions. The edition I own is the Ace mass market paperback, which means it does include Simak’s 1976 introduction (not included in earlier editions), but it does not include ​“Epilog,” which was written for the 1973 tribute collection for Astounding: John W. Campbell Memorial Anthology1. (“Epilog” is included in later editions of City.)

While it didn’t win the Hugo2, City did win the International Fantasy Award. My copy is well-worn; I still regard it fondly, despite the fact that it would seem to be exactly the sort of city-hating SF I loathe. And the book isn’t exactly keen on humans either. But it has the Dogs and the Cobbly worlds, and apparently that’s enough for me. And for many other readers as well.

Yes, this book should have been featured in my final Norton review. It’s not, because someone (and I am not naming names here) didn’t read the Waterloo Public Library entries for Dragon Magic and Exiles of the Stars carefully enough. That person overlooked the little McC notation indicating that the books were to be found at the McCormick branch (which is effectively inaccessible to me). It will take long enough to transfer the books to the central branch that waiting means missing the deadline for today’s review. And I prefer not to miss deadlines.

1973’s Forerunner Foray is third in the Forerunner series. It’s also the first one in which the Forerunners play a significant role, three books and thirteen years into the series.

Ziantha’s promising psychic powers have caught the attention of Yasa and Ogan, two ambitious members of the Thieves Guild, and earned her a ticket out of the Dipple. It’s true that she is more of a valued possession than a valued employee, but even that is better than a life spent in the Dipple. It’s not like Yasa and Ogan don’t take care of her; not only have they honed Ziantha’s psychic powers, but they have trained her as a thief and a master of disguise.

All she has to do is follow orders to the letter, never screw up, and never step out of line and she will be secure until the moment she has outlived her usefulness.

In the opening chapter, Ziantha screws up by exceeding her instructions. She has been told to break into the home of a certain Jucundus. While there, she is strangely attracted to seemingly valueless curio. She cannot forget the curio and while brooding over it, discovers a new psychic power. She teleports the curio to her location. While she gains the curio, she also alerts the Patrol’s mentalists to the fact that there is a powerful unregistered psychic somewhere on Korwar. Oh yes, and she succeeds in alerting her master and mistress that she has stepped out of line.

Miyamoto Usagi is a long-eared lagomorph ronin living in a fantasy version of Edo-era Japan. There, everyone is some form of anthropomorphic animal1: rabbits, snakes, monkeys and so on. Lacking a master, Usagi moves from place to place, having adventures along the way.

Here are seven of them.

In the past, my main interest in William R. Forstchen was keeping an eye on his Wikipedia entry. Someone, I could not say who, appears to be policing the article (and one of its subsidiary entries) to ensure that no detailed discussion of Forstchen and Gingrich’s 1995 novel,1945, appears. 1945 had a noteworthy sales record1

and in the Darwinian world of modern publishing, it’s all too easy for one poorly selling book like 1945 to torpedo a career. It makes perfect sense that anyone with an interest in the success of an author or authors who have a dud book to their credit would want to minimize public discussion of that book. It is certainly interesting to watch the minimization proceed.

I am happy to say that William Forstchen survived the debacle of 1945 and went on to write quite a lot of novels. I am even happier to say I have not read most of them. If only I could say the same for 2014’s Pillar to the Sky, a book about which the kindest thing I can say is ​“blandly derivative of far better novels published two generations earlier.” 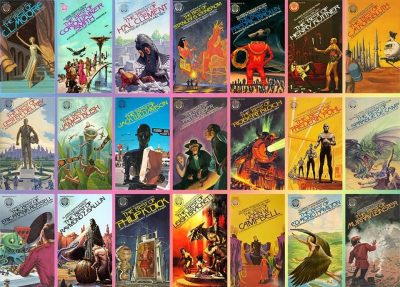 I note just two: Leigh Brackett, reviewed here fairly frequently, and Catherine Lucille Moore, the author of this week’s Rediscovery. Diversion has republished Moore’s 1975 collection, The Best of C. L. Moore, as an ebook. More relevantly to this review, they sent me a copy.

Moore was prolific and well-regarded. She would have been the second woman to be named Grandmaster of the Science Fiction Writers of America, had her second husband not intervened. He claimed that the honour would only confuse her (Moore had Alzheimer’s). But her work has nonetheless been acknowledged in other ways … by collections like this one, for example.

Note: this edition is not quite identical with the 1975 edition; the new ebook omits Lester del Rey’s introductory essay, 40 Years of C. L. Moore.

One of the great joys inherent in being an SF reader is that it’s perfectly possible to find yourself waiting decades between instalments in an ongoing series. For example, I’ve been waiting for the fourth Anthony Villiers book since roughly the time the Leafs last won the Stanley Cup (an event not actually within the living memory of my exgf). Next to that, the eighteen years between 1993’s The Last Dancer and the subject of today’s review, The AI War: The Big Boost, was but a short recess.

2080: The Unification holds all Earth in its iron grip; the spacers, scattered from the Moon out to the Asteroid Belt, are still free. The existence of the spacers is intolerable to those who run the UN. It is just too too sad that millions of people across the Solar System are forced to live without Population Bureau regulation or helpful Peace Force cyborgs (who impartially shoot down criminals and inconvenient bystanders alike). Accordingly, since 2072, the UN has been constructing the Unity, a seven-kilometer-long spacecraft intended to bring the full benefits of UN government to every corner of the solar system … or destroy those corners trying.

Having tried and failed to prevent the construction of the UN vessel, the spacers have no choice but to turn to the one man who can consistently foil the UN and its Peaceforcers: Trent the Uncatchable.

If you’re a North American of my age and you read science fiction in any quantity (especially via public libraries), then the odds are pretty good that you encountered at least a few of the Winston Science Fiction juveniles and you would be familiar with this logo.

I had toyed with the idea of reviewing the whole line, but I discovered, to my great annoyance, that there are almost forty books in the line and not one of them was written by a woman. Doing such a series would also do deplorable things to the gender ratio stats for my reviews1.

Instead, I decided to pick one example to give an idea of what the line was like. It was tough to decide between Raymond F. Jones’ 1958 The Year When Stardust Fell and Five Against Venus, Philip Latham’s 1952 epic tale of a thinly disguised Robinson family2 who aim for the Moon but end up on Venus, where they encounter man-bats. I really liked the man-bats, and the notion of a Swiss family Robinson in SPAAACE was … ah … deliciously predictable. I finally decided that the Jones novel was more influential.

The People who take center stage in Norton’s 1972 Breed to Come have only a vague idea of who they are or where they came from. Centuries earlier, Demons ruled the world. Then their hubris both doomed the Demons and raised their victims — the feline People, the porcine Tuskers, the ratlike Rattons, and the canine Barkers — from mere animals to people. Or so Furtig of the People has been taught since he was a cub.

As far as Furtig knows, the most serious problem facing him is the need to prove himself to those who choose, the females of breeding age of the tribe. I regret to report that this effort will not go all that well for Furtig, who is brave and smart — but not especially adept at the sort of hand-to-hand contest that is one of the customs of his people.

The good news is, having his head handed to him by a much larger Person isn’t close to worst thing that will happen to Furtig by the end of the book. Not only will his forlorn journey of exploration leave him a prisoner of the foul Rattons, but the Demons are at last returning home.…

This week’s unexpected discovery is Ha Il-Kwon’s webtoon Duty After School, recommended in one of the many, many, very long comment threads over File770, in the context of ​“works worthy of a Hugo.” I had planned to limit myself to a quick glance, which is how my archive binges always begin.…

Being a high school student is stressful enough; if you’re not swotting to pass university entrance exams, you’re probably trying to figure out what real world job to try for after graduation. And you have to deal with crushes, friendships, and the adolescent pecking order. Happily for Chi Kim and his fellow students of Sungdong high school, life hands them an effective distraction.

Less happily, it’s in the form of an alien invasion.